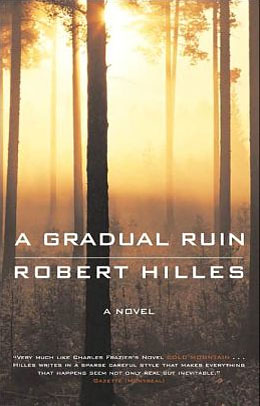 A GRADUAL RUIN
by Robert Hilles

The irony of Robert Hilles’ second novel is that the one thing it lacks is poetry – ironic because Hilles is also a Governor General’s Award-winning poet. The writing here is spare, unadorned, at times even prosaic, a reflection perhaps of subject matter that is almost unrelentingly bleak. This is a novel whose force is in the stories it tells, stories of lives damaged seemingly beyond repair as a result of political and personal events far beyond the control of the characters who endure them.

A Gradual Ruin tells the story of Tommy, a young soldier from Kenora, Ontario, who, in the final moments of the Second World War, makes a crucial decision to try to save a young German girl, and in so doing gets separated from his company and lost in enemy territory. Despite his efforts, the girl is killed and Tommy is captured by the Soviets who, taking him for a spy, send him to the infamous gulags where he suffers degrading physical and mental torments for several years before a freak circumstance finally offers him the tantalizing possibility of escape.

Tommy’s tale parallels that of Alice and her teenaged daughter Judith, who are seeking to rebuild their lives in 1960s northern Ontario in the wake of the sudden death of Alice’s husband Peter. The troubled Judith turns to delinquency and ends up in a foster home from which she runs off.

The two stories collide near the novel’s end as war-weary Tommy discovers the runaway Judith hitchhiking. It is in this unlikely pair’s halting, tentative forays into the truth of each others’ lives that the novel finally offers some hope of healing and redemption for its beleaguered but largely sympathetic characters.