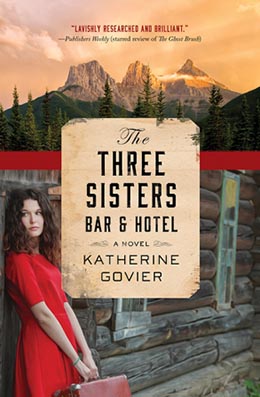 Something called the “CanLit generator” became a minor sensation on social media recently. Go to the latter’s website and click on a button and you get a series of random, non-sequiturish plotlines based on clichés about our national literature: “An unnamed protagonist becomes involved with the fur trade to make peace with the parents they never knew”; “An archivist absent-mindedly buries a memento in the dirt outside their childhood home to rediscover themselves at the family cabin.”

The CanLit Generator is the brainchild of programmer Adam Brady, who’s been soliciting the public for ideas. But he need look no further than Katherine Govier’s new novel, The Three Sisters Bar & Hotel, which — from an opening scene with someone standing on a train platform to a lengthy description, near the end, of a Canada Day Parade and fireworks — is awash, some might say drowning, in CanLit tropes: there’s a close call with a bear, a doomed fossil-hunt in the Rockies, an impassioned description of a glacier, a mining tragedy, an illegitimate mixed-race child who surfaces as an adult, an origin story about the national-parks system, a legend about an ice-age mastodon, and a non-starting love affair between federal civil servants. Did I mention it’s a multigenerational saga? It’s that, too.

In the novel’s frame story, set in the present day, the three Mariner daughters have been summoned from their homes across the continent to the Rocky Mountain town of Gateway (a stand-in for Govier’s part-time home, Canmore). Their 93-year-old father, Walter Mariner, has an announcement: he’s bought The Three Sisters Hotel, a long-shuttered, decrepit local establishment named for its view of the (actual) three sisters peaks.

For a nonagenarian to take up hotel-keeping and restoration with a wife in the early stages of dementia seems like poor career planning. But Walter has taken things a step further by making the girls the hotel’s official owners; “girls” being a relative term here; all are well into middle age — one is a grandmother — with established lives elsewhere. It’s thus not surprising that their reaction, like ours, is bafflement.

The rationale for the presumptuous, and rather burdensome gift lies, ostensibly, in the family’s past, where the majority of the novel’s nearly 500 hundred pages take place. Though what eventually emerges doesn’t altogether satisfy: it turns out Walter’s wife, Iona, is the daughter of Herbie Wishart, a hunting guide who ran the place decades earlier alongside his wife, Gwen.

From here we plunge backward through time to the novel’s central event, the 1911 disappearance of an American Quaker and fossil-hunter, Doctor Professor Hodgson, along with his two grown children, black butler and Chinese cook, during a summer expedition in the Rockies.

Having been the expedition’s guide on its inbound journey, Herbie is riddled with guilt. But though he resolves to “Find out what happened. If it’s the last thing I do,” his actual efforts seem a bit half-hearted — most of what he does discover over the next decade effectively falls into his lap. He’d been taken with Doctor Hodgson’s daughter, Isabel, so when the latter’s sister, Gwen, comes to Gateway to be closer to her lost relatives, he deepens his connection to the family by marrying her.

Govier has packed a dizzying amount into the novel, much of it in the form of subplots and whimsical digressions. Some involve real people, such as the butterfly collector Mary De la Beche Nicholl and Chief Buffalo Child Long Lance, the white American journalist who famously masqueraded as a Blackfoot chief. But for the most part these do little to develop the plot; contribute, rather, to its indulgently baggy sprawl.

The most banal of the subplots focuses on Helen, a civil servant in Ottawa tasked with the management and promotion of the newly formed Rocky Mountains Park. Helen has progressive ideas about aboriginal rights — she disagrees, for instance, with the government’s curtailing of native hunting — but astonishingly retrograde notions about her gayness, which she discovers after a years-long romantic obsession with her male boss and a series of cringeworthy sexual encounters with Chief Long Lance while trail riding out west: “She wondered how it was that no one had seen through her, how her predilections had not announced themselves with her bossiness, her pack of female friends, her lack of a husband, her lack of what they called sex appeal and her hatred of blondes.”

Govier has a tendency to “litsplain”; to treat her fiction, that is, as a series of teachable moments. If you didn’t already know something about the history of mining in the Rockies, Japanese internment camps during the war, or the Canadian government’s purchase of plains Bison from a Montana rancher in the early part of the last century, you’ll learn about them there here via some extremely verbose prose. What can, and should, be said in a page usually takes several.

Though Adam Brady says he developed the CanLit Generator out of a genuine fondness for Canadian fiction, no writer would want to have his or her work mistaken for the stuff it spews out. There are a number of places in The Three Sisters Bar and Hotel where that distinction would be muddy, though none, perhaps, as unambiguously as this depiction of Helen and Mr B’s love: “No, the feelings they had for each other found expression in their mutual passion for the Canadian national parks.”