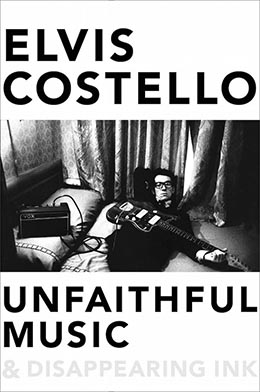 Don’t start me talking, I could talk all night, go the lyrics to Elvis Costello’s 1979 song “Oliver’s Army.” It was clearly the case while writing his hefty but illuminating new memoir Unfaithful Music & Disappearing Ink.

Costello’s appealingly nonlinear narrative style often feels like a jammy windshield wiper: chapters repeatedly return to certain chronological spots—the lead-up to his late-seventies’ breakout with his band The Attractions, for instance—yet delay mention of salient details like the adoption of his stage name (he had no particular fondness for his namesake, who died shortly before his first US tour), or his defiant television debut on Saturday Night Live, which famously got him banned from the show.

Anyone who watched Spectacle, the music-interview program Costello hosted for two seasons, was left with no doubt about his encyclopedic, genre-spanning musical knowledge. Though his first record, My Aim is True, is considered one of the greatest rock albums of all time, Costello has since made serious forays into jazz, classical and country. He’s at home in Nashville and New Orleans, where collaborated, post-Katrina, with Allen Toussaint. His 2003 marriage to Diana Krall was surprising only to those unaware of his omnivorous musical sensibilities.

Though he only lived with him until age seven, when his parents split, Costello’s late father, Ross MacManus, remains an indelible presence throughout the book. A versatile working musician, MacManus not only passed his musical genes on to his son (née Declan Patrick MacManus), he also passed on the actual music, in the form of the hit singles he got through his job, that became Costello’s emotional and professional gruel.

He is conspicuously silent about his first two marriages, though his guilt over infidelity during his first, which made him a father in his early twenties, is palpable. In contrast, the ink spilled over his second, to Pogues’ bassist Cait O’Riordan, is as sparse as it is cringeworthy (“I went inside a room, turned off all the lights, and could not find the door. For eighteen years.”) When things get awkward, Costello tends to let his lyrics do the talking.

He is most at ease, and endlessly compelling, when writing of his Irish-English lineage, his artistic process and countless musical collaborations, and his remarkable evolution from angry young man to respected musical not-quite-elder statesman.