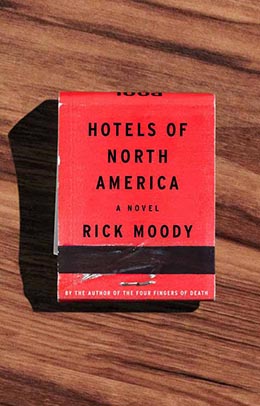 THE HOTELS OF NORTH AMERICA
by Rick Moody

Rick Moody is primarily famous for two things at opposite ends of the desirability spectrum: his popular 1994 novel the Ice Storm, which became a successful film, and for having been labelled “the worst writer of his generation” by the ostentatiously venal critic Dale Peck in 2002.

With its elaborate, book-within-a-book conceit, Moody’s sixth novel, Hotels of North America, tips its hat to the metafictions of Nabokov, Cervantes, Mitchell and Calvino. We are ostensibly reading The Collected Writings of Edward Morse—the “writings” here being a series of posts by the top reviewer on the RateYourLodging.com website. Morse’s assessments of various establishments’ soaps, keycards and minibars are, however, merely the springboard to a series of digressions that, in their non-linear totality, constitute his life story: the early abandonment by his father and subsequent dereliction of his own parental duties, alcoholism, trysts with a masochistic language-arts instructor, acrimonious divorce, love of a woman referred to only as K., and gigs as a motivational speaker, day-trader and conman.

It’s a clever concept undermined only by the manner of its execution. This includes the book’s belaboured setup where, in a five-page preface, the Director of the North American Society of Hoteliers and Innkeepers confesses to not having read the book—which has been placed free of charge, in select hotels. His staff, however, has assured him it’s “a heartwarming, funnybone-tickling volume about the peaks and troughs of itinerant life. It’s about rebirth and rehabilitation.”

It is no such thing (is the staff pulling a fast one?) And from here the awkward, heavyhanded humour continues apace, Moody attempting to eke laughs out of the contrast between Morse’s lofty diction and his forays into the sophomoric grotesque—menstrual-blood soaked towels and (clichéd) musings about bodily fluids on unwashed bedspreads, say—or from longer passages where subtlety is too often indistinguishable from dullness. The inclusion of a lengthy, and real, Amazon review of diarrhea-inducing gummy bears, which made the internet rounds last year, feels slightly dishonest, as if Moody were trying to pass it off as his own.

Moody is not—never was—the worst writer of his generation. Despite a few bright moments, however, he has written a disappointing novel.