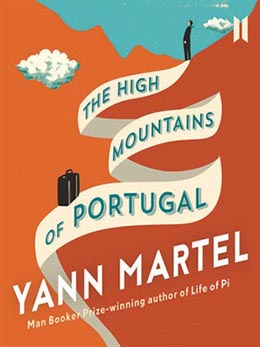 THE HIGH MOUNTAINS OF PORTUGAL
by Yann Martel

Though set decades apart —“Homeless,” “Homeward,” and “Home” — the three interlinked panels of The High Mountains of Portugal, Yann Martel’s triptych of a novel about grief and origins, have a series of elements in common: a bereaved man, a chimpanzee, people who walk backwards, and the titular mountains.

In the first, which begins in Lisbon, in 1904, Tomás, a curator who has lost his father, son, and lover in short order, discovers the diary of a seventeenth-century priest living in a slave-trading colony in Africa. Obsessed with a mysterious artifact the priest sent to a church in the High Mountains of Portugal, Tomás borrows his rich uncle’s car and sets off to find it. That he cannot drive is the source of some moderately successful slapsticky humour.

We find Martel in full magic-realist mode in the second part, where a woman shows up in dead of night at the office of an Agatha Christie-loving pathologist to request an autopsy be performed on her deceased husband’s body, which she has conveniently brought along in a suitcase.

If the novel’s first part is a tad long, the second a tad digressive, this is made up for fully in the third, where, in the present-day, a recently widowed Canadian senator goes to an Oklahoma chimp sanctuary and ends up adopting one of its residents, Obo, whom he then takes to live with him in his ancestral homeland in the High Mountains of Portugal.

There’s some useful tension here: Peter isn’t totally sure that that Obo, who suffered through unspeakable experiments in his past, won’t turn on him and we, familiar enough with Planet of the Apes, aren’t either. But their relationship is also written with nuanced beauty; not for nothing has Martel established himself as our premier writer of animal-based fiction (though André Alexis has lately given him a run for his money).

Initially, Martel’s ending seems a bit neatly tied, but there are, it turns out, enough messy threads to keep us busy. His characters’ discovery that the High Mountains of Portugal are in fact more like series of rolling hills, is a bit like our own discovery of the novel, whose various parts add up to something not towering, but cumulatively forceful.