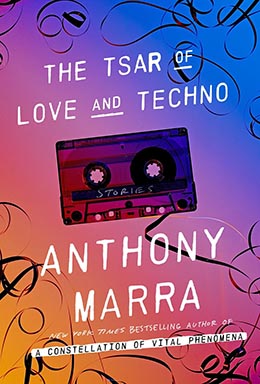 THE TSAR OF LOVE AND TECHNO
by Anthony Marra

With its complexly interlinked characters (among them a ballerina exiled to Siberia and a Chechen war-veteran-turned-drug-dealer); recurring objects passed, like a series of batons, from tale to tale (an unplayable mixtape, a painting of a Chechen landscape); and near-century-long narrative arc (from the Stalin-era Soviet Union to Putin’s Russia) splayed against a backdrop of systemic corruption and personal futility, Anthony Marra’s new book presents as if it were the love child of David Mitchell and George Orwell.

The Tsar of Love and Techno revisits some of the physical territory of Marra’s previous book, the Chechnya-set novel A Constellation of Vital Phenomena (Marra is American but studied in St. Petersburg), yet it possesses an appealingly sardonic wit largely absent in its self-serious (but much-lauded) predecessor. In Kirovsk, the Siberian-labour-camp-turned-mining-hellhole where much of the action is set, residents “measured economic prosperity by the spread of rashes on our exposed skin” while families swim at a local lake of industrial runoff, imagining it’s the Black Sea. Decades earlier, Roman Markin, an artist-turned-censor charged with doctoring photographs in the bowels of Leningrad’s future subway during the height of the purges, notes bitterly of his work: “Those who can’t succeed, teach. Those who can’t teach, censor the successes of others.”

It’s an unrelentingly grim societal portrait (albeit one backed up by history books and newspapers), though Marra does take the odd, sideways jab at his homeland: “In another country, he might have grown up to be an investment banker, but here he grew up to be a murderer.”

Powerless against the larger forces shaping their lives, Marra’s characters perform small, personal acts of subversion. Roman takes to painting the image of his brother—executed for his “religious radicalism”—into the same photos from which he expunges others. Decades later, a curator speculates about his motives while organizing an exhibit of his work.

Tsar has been promoted as short-story collection, which strikes me as an odd bit of genric gerrymandering (though to what particular end, I’m not sure). You can read these stories as standalones, but do so and you’ll miss out on Marra’s fiendishly clever narrative web and the true scope of his virtuosic achievement.