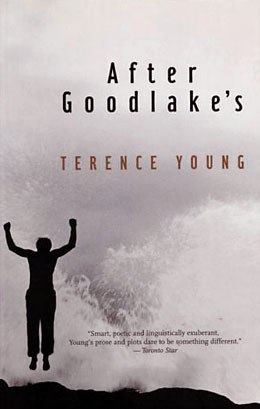 AFTER GOODLAKE’S
by Terence Young

Fergus Goodlake is a passive, middle-aged man with prostate trouble who, up until now, has managed to amble through life taking the path of least resistance. The latest of three generations of Goodlakes to own an eponymous deli in Victoria, Fergus has made waves in his otherwise predictable existence by carrying on a protracted affair with a much younger woman, despite the fact that he is generally satisfied with his 25-year marriage. Inevitably, Fergus gets sloppy, and his wife, Annie, discovers a paper trail exposing Fergus’ adulterous ways. The irony for Annie is that she too had recently been entertaining the notion of an affair. She had never seriously considered the possibility that Fergus might act on the impulse.

Terence Young’s first novel (after one well-received collection each of short stories and poetry) strives toward the exalted minimalism of writers such as Richard Ford, Raymond Carver, and Carol Shields. Young’s writing, however competent, lacks the subtlety and finesse of these luminaries, and his attempt to free the sublime from the mundane never really succeeds.

The chief problem here is a set of characters that are hard to care about because they seem to care so little about themselves. The fact of Fergus’s affair offers the reader hope that an inner fire or passion somehow bubbles beneath his placid surface, but the banal relationship is ultimately devoid of any sexual or emotional urgency. A pivotal scene in which Annie confronts Fergus in front of both his mistress and his son should be cringe-inducing, but fizzles because the stakes are too low.

In the end, Young’s characters walk away with little hesitation from the lives they have spent years building up. And it’s in a similar spirit of relief that the reader leaves their world at the novel’s end.

Comments: Comments Off on AFTER GOODLAKE’S
by Terence Young Posted by: admin Categories: Adult Fiction, Reviews Tags: Fiction, Quill and Quire
← A GRADUAL RUIN
by Robert Hilles
THIRD AND LONG
by Chris Fisher →