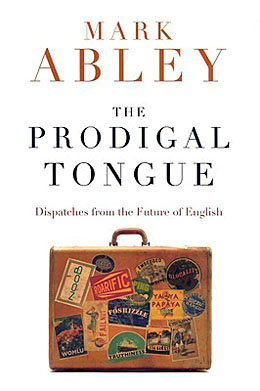 THE PRODIGAL TONGUE:
Dispatches from the Future of English
by Mark Abley

Radical changes are taking place in language in nearly every corner of the globe, but Mark Abley believes we are asking the wrong questions about the phenomenon. Instead of lamenting linguistic decline, Abley thinks we should be asking why the changes tend to provoke enormous anxiety, as well as how we can adapt to the ongoing “verbal revolution.”

Abley, a longtime journalist, poet, and author, does not take a passive approach to his work. A devoted traveller, for this book he went to Singapore, Japan, Southern California, and the U.K., experiences he recounts here along with previous sojourns in Africa, Asia, and South America. The nature of the changes he documents are dizzying in their depth, variety, and scope. From the evolution of word meanings and slang to the proliferation of technical neologisms to the effect of video games and text messaging, Abley demonstrates an encyclopedic grasp of his subject, no matter how seemingly insignificant or trivial the details.

But the book’s strongest suit is its breakdown of how English – the lingua franca of a globalized world -­ is hybridizing with other languages, creating entities such as Singlish (Singapore), Hinglish (Hindi), and Konglish (Hong Kong). Abley’s chapter on Singapore, in particular, is an eye-opening primer on language issues in a country whose ethnic diversity forced it to reverse unsuccessful policies and re-establish English as its official language. A chapter on Japan offers similarly engrossing insights, including the irresistible nugget that a product known as Kidsbeer was marketed in that country under the slogan “Even kids can’t stand life unless they have a drink.”

In his eagerness to cover every possible angle, Abley sometimes sacrifices focus by barraging us with facts. A chapter on the language of science fiction feels tacked on, while the observation that mp3 players can cut us off from the audible world has been true ever since the lowly Walkman was trundled out 25 years ago. These secions are simply unnecessary padding in what is otherwise an impressively researched and enlightening piece of work.

Comments: Comments Off on THE PRODIGAL TONGUE:
Dispatches from the Future of English
by Mark Abley Posted by: admin Categories: Adult Non-fiction, Reviews Tags: ethnic diversity, future of english, language, linguistics, longtime journalist, passive approach, Quill and Quire, singlish singapore
← NOTHING TO BE FRIGHTENED OF
by Julian Barnes
THE GINSENG HUNTER
by Jeff Talarigo →