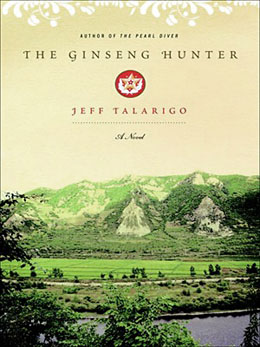 THE GINSENG HUNTER
by Jeff Talarigo

Like his 2005 novel, The Pearl Diver, which told the story of a young woman in post-war Japan whose career as a pearl diver is cut short when she is exiled to a leper colony, Jeff Talarigo’s The Ginseng Hunter also takes as its starting point an Asian protagonist with an esoteric profession who faces unexpected adversity in a climate of political unrest.

This time, the action moves to the banks of the Tumen River on the Sino-North Korean border. It is the turn of the most recent century, although this fact is readily forgotten given the harsh, old world conditions against which the characters must prevail. Technology is practically nonexistent and hunger is a constant threat.

The story is told through the eyes of a nameless middle-aged Chinese man who, as the title suggests, is a ginseng hunter — a calling whose techniques he painstakingly learns through years in the forest with his Korean-born father and uncle. The finding of the elusive, hard-won roots is a slow, ritualistic process requiring an almost psychic connection to the land, not to mention the patience of Job. The sale of only a few roots will ensure the hunter’s survival through the harsh, long winter.

The ginseng hunter’s simple, solitary life is nevertheless marred by politically wrought tragedy. His mother and uncle were two of the 30 million people who died in a famine attributed to the failure of Chairman Mao’s economic policies. His father dies a decade later, angry and disillusioned when the government decrees the local sparrow population be killed off after the birds consume the local harvest one year. Despite this legacy, the ginseng hunter maintains a certain obliviousness to his social environment, one that includes starved and volatile North Korean soldiers in foxholes just across the river.

The ginseng hunter’s story alternates with that of a North Korean woman and her young daughter desperately trying to escape their own poverty and imminent starvation under Kim Jong-Il’s murderous regime. Like many other refugees, the pair are sold to the authorities by equally hungry peasants, the mother winding up as a prostitute in a Chinese brothel run by Miss Wong, a mistress who counts among her clients the ginseng hunter, who visits her establishment on his monthly trips to the city of Yanji.

Against his better judgment, the ginseng hunter finds himself getting hung up on one of the brothel’s prostitutes. The woman is North Korean, but Talarigo leaves her identity purposefully vague: she may or may not be the mother separated from her daughter. The point may also be that it doesn’t matter, there being thousands more just like them. Through his lover, the ginseng hunter begins to gain an understanding of the dire situation across the border. When Miss Wong unexpectedly offers to sell the woman to him, however, he panics at the realization that her fate may now lie in his hands.

Talarigo’s descriptive passages are written with a kind of poetic impersonality, almost in the style of a parable. He does a commendable job of evoking setting and mood, but his achilles’ heel is his dialogue, which more often than not is wooden and preachy. Knowing that the geography and politics he describes will be obscure to many of his readers, he leaves the explaining of things to his poor characters, who flounder under the burden, as in this exchange between the ginseng hunter and his —ahem —well-informed lover:

“North Korean What are they doing over here”

“They are looking for us who have escaped. When they catch us, they take us to the border crossing. Every week, in the city of Tumen, there are trucks filled with North Koreans who are handed over at the border.”

“Miss Wong said that they are repatriating them.”

“Some of the people are instantly killed in the town square, others are sent to camps, and the luckiest go back and scour the mountains for something to eat.”

Talarigo appears to have expansionist dreams for his self-minted genre of read n’ learn fiction about the world’s trouble spots. His next novel deals with Palestine and he is apparently researching another on Chechnya. It’s a project that can work if he reins in his tendency toward hand-holding and trusts that, in the age of Google, an inspired readers will happily fill in the blanks he needs to start providing them with.