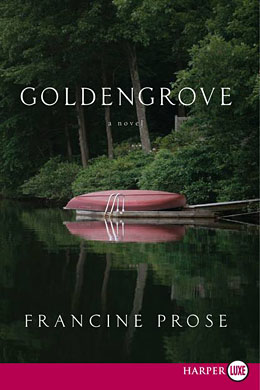 Despite years of steady, high quality literary output ranging from short stories to novels (this is her 15th) to nonfiction, including the recent bestselling guide Reading Like a Writer, the aptronymically named Francine Prose still lies lower on the reading public’s radar than she deserves to be.

The bucolic cover of Goldengrove, which shows a red canoe sitting on the dock of a placid lake in midsummer, suggests a sleepy cottage read. What we get, rather, is a consistently gripping coming-of-age story — set in summer, yes, but that’s where any reference to niceness ends — centred around the accidental drowning death of a teenaged girl.

The narrator is Nico, a pragmatic, pudgy, thirteen-year-old girl ill-fittingly named after the dour Velvet Underground chanteuse. She lives in a middle-class lake community in New York State with her ex-hippie parents and 17-year-old sister, Margaret: a beautiful, willowy singing sensation who blows away her classmates with a sultry rendition of My Funny Valentine at the school talent show, despite her mother’s objections to its gender politics. It’s a performance that tells Nico everything she needs to know about what is going on in her sister’s life:

She always sang it differently, but it was always pure sex. When she sang, “Stay little valentine, stay,” it sounded like honey, like grown-up female code-speak for  “Please, have sex with me, please.” I’d wondered how she could have sung it like that in front of the whole school, and how the teachers and parents could have given her a standing ovation. Near the end, someone’s disgusting father actually sobbed out loud. Didn’t it cross their minds that she could never have sung it that way unless she was having sex with her boyfriend, Aaron?

Margaret yearns for the desaturated romanticism of the ‘30s and ‘40s, an obsession she indulges through classic films, vintage clothes and a repertoire of jazz standards. She smokes with the sultry nonchalance of the starlets she admires, despite being warned not to by the doctor who diagnoses her with a mild heart condition. Margaret and Nico are close, and the latter is Margaret’s prime alibi in her love affair with Aaron, a talented painter nevertheless dismissed by Margaret’s parents — liberal-types who worry about the right issues — as having “a screw loose.” As both Aaron and Margaret will be off to expand their respective talents at college in the fall, the romance is slated to end when the summer does. Part of what Nico perceives to be the payback for her complicity in her sister’s escapades is the license to daydream about what her she and her boyfriend might be up to behind closed doors.

And then Margaret, the star sister with all the looks and self-assurance, drowns in the pretty lake, leaving the remaining three family members a collective, grieving wreck. The fact of her being the golden child is unspoken, but heavy as an anvil.

At loose ends, Nico agrees to mind the till at Goldengrove, her father’s bookshop, for the summer. She yearns for an encounter with Aaron, ostensibly for the portal he can offer into her sister’s life: a wish that is granted when he does just that and then takes the extra step of suggesting the two of them get together to process their grief.

Nico now has to find her own alibi to orchestrate a series of meetings with Aaron, which escalate in their strangeness and intensity. Nico’s own grief has led to a weight loss that reveals her resemblance to her sister, and she soon finds herself eagerly fulfilling Aaron’s requests to don Margaret’s clothing and share in the same activities the couple once did in the past. The increasingly sinister overtones to Aaron’s behaviour only partially reach Nico, who, while not entirely innocent, ultimately believes herself to be protected by her age, her grief, and her erstwhile lowly status as Margaret’s kid sister.

Prose has apparently forgotten nothing of the belaboured metamorphoses of adolescence, and is one of few writers who can evoke the cusp-like torture of it all so exquisitely.

She builds a simmering nausea around the Nico/Aaron relationship, the resolution of which hinges on Nico’s ability to realize that something has imperceptibly shifted: that things that once meant one thing may now mean something entirely different through no fault of her own. This is another masterful work from Prose, who accomplishes many things with seeming effortlessness, not the least of which is the exploitation of the fraught tensions and ambiguities out of which our sense of self is meant to somehow emerge as a rite of passage.