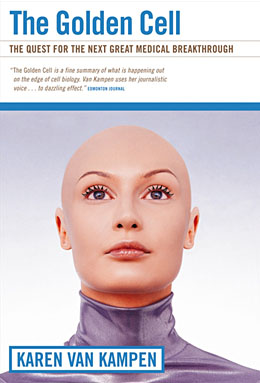 THE GOLDEN CELL:
Gene Therapy, Stem Cells, and the Quest for the Next Great Medical Breakthrough
by Karen van Kampen

While many North Americans are familiar with such subjects as stem cell research and regenerative medicine from parsing the odd newspaper article, it is probably safe to say that the vast majority of us are as informed about the science behind them as we are about the surface of Jupiter. And so it will be with great satisfaction that this self-same group will read Karen van Kampen’s assiduously researched book and gain insight into an area of science that may well hold the key to the future of medicine but that also tends to be a magnet for controversy.

The Golden Cell looks at well-publicized scientific feats, such as the mapping of the human genome. More fascinating still, the book looks at lesser-known accomplishments by current medical scientists, many of them Canadian, who are at the forefront of fields such as biotechnology and gene therapy. We read about a cell transplantation procedure that has the potential to make open heart surgery obsolete; the mind-boggling possibility of growing new human organs from stem cells; and genetic screening for breast cancer that could save thousands of lives.

Van Kampen has produced a book that is not only an excellent primer on the fascinating science behind such topics but is also a compelling study of the personalities and debates that have made them such political hot potatoes. It seems the dark side is never very far away from these medical fields. Accusations of profiteering, eugenics, and patent abuse have continued to taint many medical endeavours. There is the case of Jessie Gelsinger, a teenager who was the first person to die after volunteering for gene therapy research. Seemingly noble efforts to seek cures for illnesses by studying the DNA of indigenous peoples have been condemned as “genetic colonialism.”

This book is dense and heavily footnoted, but van Kampen keeps the material accessible and interesting. All this in spite of the difficulty of bringing so many complex subjects to a general audience.