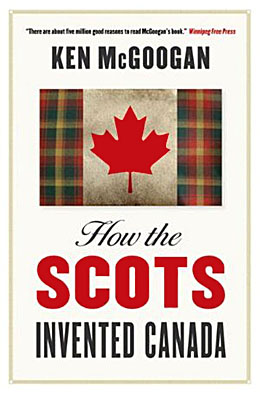 HOW THE SCOTS INVENTED CANADA
by Ken McGoogan

Since the 1700s, the Scots have had a ­profound influence worldwide, as American author Arthur Herman emphatically argued in his 2001 book, How the Scots ­Invented the Modern World. So why do we need another book about Scottish ingenuity focused solely on Canada? Because, writes Ken McGoogan, “except for the homeland, this is the country where Scots and their ­descendants have accomplished the most.”

Scots have never exceeded more than 16 per cent of Canada’s population, McGoogan points out, yet 13 out of 22 Canadian prime ministers were of Scottish heritage. Low- or high-born, the Scots who came here tended to possess strong leadership skills as well as open, flexible attitudes that helped give rise to Canada’s cultural pluralism.

How the Scots Invented Canada is ­broken into three themed sections: “Pioneers,” “Builders,” and “Visionaries.” McGoogan calls his approach “deliberately less academic” than Herman’s. Indeed, this is an amiable volume that serves as both an engaging read and a handy reference.

McGoogan doesn’t aim for the obscure: most of the names here – Fraser, MacDonald, McGill, Eaton, Bell, Douglas, Trudeau – will be familiar to anyone with even a cursory knowledge of Canadian history. With 14 profiles, women seem slightly better represented than in standard textbooks, Nellie McClung, Agnes McPhail, Alice Munro, and Margaret Laurence being among the most prominent figures mentioned.

Despite his surname, McGoogan notes that his own ancestry is a typically Canadian hybrid of nationalities. In other words, his intention is not merely to bask in his ancestors’ bright glow. In fact, if the Scottish connection were never mentioned, McGoogan’s book would read very much like a standard Canadian history textbook, which perhaps affirms his thesis.

McGoogan argues that Scottish success was not simply a fluke of genetics. It was the direct result of the widespread literacy and culture of open debate produced by the Scottish Enlightenment. It’s an uncomplicated recipe for success that policy-makers interested in an equally bold future for Canada would do well to take heed of.