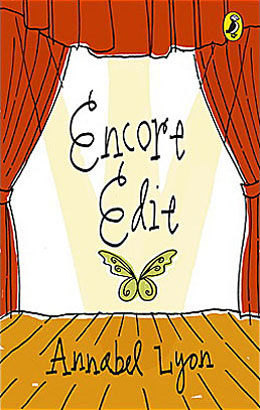 Annabel Lyon follows up the huge success of her adult novel, The Golden Mean, with a return to children’s fiction and the appealing title character of her 2008 debut in the genre, All-Season Edie. These new Edie adventures take place two years later, with the now 13-year-old negotiating her first year of high school.

On day two, things are already going badly for Edie. A simple request to go to the washroom turns into a complete social embarrassment and lands her a new nickname: “Number One.” It’s not meant as a compliment. Compounding all the unwanted attention, Edie has been asked to walk her Down’s syndrome-suffering cousin Merry to school every day, forcing her to endure what she assumes to be the judgmental gaze of her peers.

Sensing an opportunity to shirk her obligations to Merry, Edie signs up to help with the school musical. She’s surprised when her suggestion for a modern version of King Lear beats out calls for Mamma Mia! and High School Musical, but even more surprised when she finds herself in the director’s chair. But not everything goes according to plan. It turns out that musicals are Merry’s passion, and Edie’s parents insist she find a way to include her cousin in the production.

Edie gives Merry a job cuing music, which doesn’t play to the latter’s skills. Another attempt­ – to cast Merry as the fool – results in boos from the students, who assume Edie has set up Merry for a fall. Merry’s uncanny powers of memorization finally give her an opportunity to shine when both the girl who plays Cordelia and her understudy get sick before the musical’s first performance.

It’s a feel-good, Glee-worthy ending, but the path Lyon’s tale takes goes well beyond facile messages about inclusivity. What’s ­refreshing here is that it’s Edie’s own fragile ego that is her worst enemy: the teens at her high school are more decent and open-minded than she gives them credit for. This is intelligent, timely fiction anchored by a heroine with real staying power.