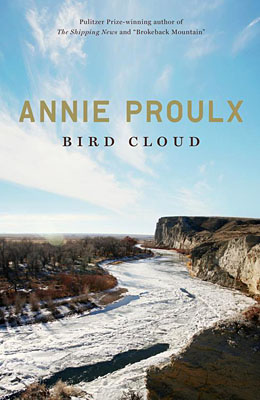 It’s probably safe to say that anyone who ever set out to build their “dream home” found that it was a dream they quickly woke up from. It’s certainly the case for writer Annie Proulx, who in 2003 at the age of 68, attempted to put an end to her peripatetic ways by building on a 640-acre property she’d bought in the Wyoming wetlands. Bird Cloud, titled after the name Proulx gave the property, chronicles her attempt to build the home where she would “end her days.” It’s also a fascinating historical, geological and political look at a part of the world that has inspired dreamers of all kinds.

Proulx imagined her house-to-be as the sum total of the collective wisdom acquired from a lifetime of renting and owning homes the world over. Its setting, atop a precipitous cliff overlooking the North Platte river on a faultline “slowly tearing the North American apart,” was dramatic. “In no place that I’ve ever lived,” writes Proulx, “have I thought so often about the subterranean movements of continents.” Wildlife was diverse, with elk, pelicans, bald eagles, mountain lions and countless bird species all in abundance.

Proulx hired an architect to design the house, which she wanted to both blend into and echo the surrounding landscape. It would incorporate modern elements, such as polished concrete floors, rusted metal panelling, a Japanese-style soak tub and a meditation room. Lots of space would be required to accommodate Proulx’s sprawling work style and massive library.

Designing turned out to be the easy part. Once the blueprints were drafted, Proulx was faced with the problem of finding experienced builders who could travel to such a remote site everyday. After months of searching, she hired the “James Gang,” a trio of brothers she grew to know intimately over the two plus years they worked for her.

Obstacles were immediate, pressing and usually cripplingly expensive. Before construction could even start, nine miles of fence was needed to keep out tramping herds of cattle from the surrounding ranches. Proulx quickly learned that the Nature Conservancy from which she bought the property was less concerned with protecting wildlife than with protecting the grazing rights of local ranchers. When a cow plunged to its death off a cliff in an unfenced section of her property, four-figure compensation was demanded from the angry rancher. Another constant challenge was 70-100 mph winds that made construction difficult and laundry-hanging nigh impossible.

Proulx’s excitement slowly gives way to despair as the project goes hundreds of thousands of dollars over budget and over schedule. There is finger-pointing between the James Gang and Proulx’s architect. But the most devastating news comes when Proulx discovers, too late, that the property’s road will not be cleared in winter as the real estate agent had claimed. With only seasonal access, Proulx’s dream home is reduced to an outrageously expensive cottage, leaving her with the further problem of where to live for the remainder of the year. The title of Proulx’s story “Brokeback Mountain” could have served as an apt description of the state of her finances.

Proulx stops Bird Cloud from descending into a bitter, reality show-style rant about construction gone awry by spending at least half the book on other topics. She writes about her background and upbringing, including her French Canadian father’s “obsessive desire” to escape his working class roots “and reinvent himself as a New England Yankee.” Proulx attributes her own view of herself as the perennial outsider to her father’s forbears, whom she describes as “rootless people who have no national identity, who really belong nowhere in the United States.”

Proulx’s Canadian connection goes beyond paternal lineage, however. She attended Concordia University in Montreal and lived seasonally in Newfoundland, the setting for 1993’s The Shipping News, for many years.

A dedicated amateur naturalist, Proulx’s descriptive powers emerge powerfully in her evocation of Wyoming’s geography as well as its colourful history, one that encompasses dinosaurs, entrepreneurial adventurers and defiant, opportunistic ranchers. It has been the stomping ground of dozens of aboriginal groups—the Sioux, Ute and Cheyenne among them—their occupation evidenced by the millennia-old tools and implements Proulx finds scattered around her property.

Bird Cloud’s one unforgiveable flaw is its lack of photographs. The book’s cover has a breathtaking picture of the view from Proulx’s house, but the house itself is inexplicably not shown. And although the book is called “a memoir,” other than the chapters on Proulx’s heritage and occasional mentions of her three children, Proulx avoids any discussion of her personal life or three previous marriages.

Proulx isn’t prone to fairytale endings in her fiction and she doesn’t give herself one here. There is a kind of wistful irony to the fact that Proulx’s most enduring monument to this rugged, beautiful place—her writing—is one that can be so easily shared.