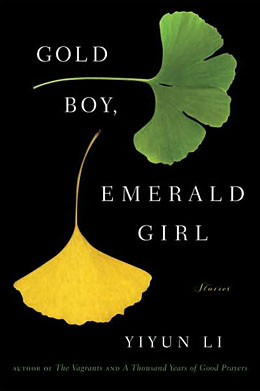 Chinese-American writer Yiyun Li is enjoying something of a meteoric rise these days. Earlier in the year the New Yorker featured her in its list of the 20 best writers under 40, and in September she was awarded the very rich McArthur—aka “genius”—grant (Cormac McCarthy and Thomas Pynchon are previous winners).  Li has one previous novel, The Vagrants. Her first short story collection, A Thousand Years of Good Prayers, won a slew of accolades, including the PEN/Hemingway and Guardian First Book awards.

Li will need to save room in her trophy case, given that Gold Boy, Emerald Girl seems poised to surpass the success of its predecessor. Most of the tales in this affecting, sometimes discomfiting, collection are set post-Cultural Revolution China. But in a country with the biggest population in the world, Li focuses on characters beset by loneliness or willfully isolated. With childlessness, death, bachelor/spinsterhood, alienation and suicide as recurring themes, the Feelgood Award is one of the few prizes Li won’t win (but that’s a good thing, of course).

Moyan, the central character in the book’s novella-length “Kindness,” is a 41-year-old woman living a contented, albeit emotionally detached life. Her few acquaintances are a “comfort,” but she otherwise views people as resented intrusions—“hijackers” or “usurpers” into her life. In the mandatory military service of her late teens, Moyan recalls the revulsion she felt at her platoon leader’s well-meaning efforts to reach out to her. With the other girls she was friendly, but never friends. The story’s title suggests a transformative moment, but Moyan never really softens her belief that kindness from those we know can only creates indebtedness; true kindness is something fleeting, from strangers. Or art. When Moyan was a child, a woman from her building, the equally aloof Professor Shan, introduced her to Dickens and Hardy, writers who gave her a joy “that I could not get elsewhere.”

A similar sense of character-as-fortress pervades the title story, “Gold Boy, Emerald Girl,” where a woman, also a professor, attempts to play matchmaker to her 44-year-old son Hanfeng, returned from America, and her eccentric, “unmatchable” former student, Siyu. The two connect briefly, just enough to realize that what unites them is mutual devotion to Hanfeng’s mother; they will marry, but only for convenience: “They were lonely and sad people, all three of them, and they would not make one another less sad, but they could, with great care, make a world that would accommodate their loneliness.”

Li is one of those rare writers—Chekhov and Levi spring to mind—who successfully made the transition from science to literature. A mathematics prodigy, Li moved to the U.S. in 1996 to study immunology, ending up instead at the prestigious Iowa Writer’s Workshop and later becoming a professor of English at the University of California.

Li’s methodological, almost bloodless style may reflect the scientist in her. Yet by delicately exposing her characters’ failings to the reader but never to themselves, Li manages to make them extraordinarily sympathetic. In this, and in her characters’ attempts to control and compartmentalize their powerful emotional instincts, Li’s writing is sometimes reminiscent of Kazuo Ishiguro. Often, entire lives are spent trying to overcome a past event. In “House Fire,” for example, a woman who takes up detective work to save troubled marriages is revealed to have once inadvertently caused the suicide of a fellow student after she reported the latter’s promiscuity to the university administration. The woman’s attempt to make up for past wrongs, however, clashes with her heavy sense of inevitability: “For some people punishment came as a consequence of their mistakes; for others, punishment came before anything wrong has been done. Welcome to the land of the unfortunate and the deserted, Mrs. Fan thought, almost relishing the unfairness of her fate, and Dao’s.”

In “The Proprietress,” likewise, Mrs. Jin, the daughter of peasants, takes on the care of a once-wealthy elderly woman whose husband was shot by Mrs. Jin’s father in a dramatic reversal of fortune precipitated by the revolution. The woman is unaware of this, and Mrs. Jin accepts that her loyalty will go unrecognized, seeing her labour as a kind of penance but also the realization of a lifelong dream to be part of Granny’s once-glamorous life.

Li has cited William Trevor as an influence, and she sometimes achieves the same elegant, rueful melancholy that marks his work; that the stories are set in China rather than Ireland adds to the intrigue. Li, who speaks Chinese at home but writes only in English, achieves a sense of cultural comingling that feels at once familiar and strange, modern yet timeless. This is a beautiful, disarming book.