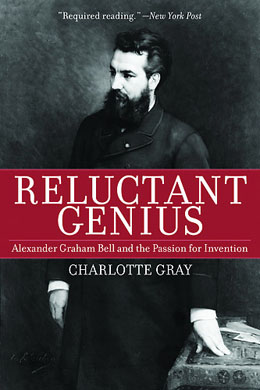 Charlotte Gray has produced an exhaustive, multidimensional portrait of the great Scottish-born inventor Alexander Graham Bell, who put down deep roots in Canada – initially in Brantford, where the first telephone call was made, but mostly in his beloved Cape Breton, where he is buried.

Having made his greatest discovery in his early thirties, Bell was nevertheless to have a long career of remarkable and virtually ceaseless intellectual output, much of which is still amazingly prescient today. While success at a young age afforded Bell with the necessary capital to pursue further experiments, it also appears to have induced in him a perpetual sense of anxiety that he might never make another major discovery. Lauded all his life for his telephone work, he abhorred the constant legal battles necessary to defend his patent and in later years actively rejected further association with the device.

Reluctant Genius offers a wealth of detail on Bell, gleaned from the copious primary source material to which Gray had access. The boxes of letters and notebooks numbering in the hundreds that she describes are almost as astonishing as the information they contain.

What stands out most here are the intrinsic paradoxes in Bell’s pursuits. His father, Melville, domineering but intellectually astute, was obsessed with developing a universal phonetic system called Visible Speech, which he recruited his son to promote. It was a system meant to be of particular benefit to the deaf, amongst whose unfortunate ranks was Bell’s mother, Eliza, as well as his pupil and future wife, Mabel Hubbard.

All his life, Bell would feel ethically compelled to return to his work with the deaf, despite Mabel’s own ambivalent feelings on the subject. He actively engaged in the debate – still very much alive today – over the benefits of sign language versus lip-reading. He was close to Helen Keller, to whom Gray speculates he may have been sexually attracted. An expert lip-reader herself, Mabel operated almost fluently within the speaking world and thus, somewhat paradoxically, found communicating with Bell’s mother and with Keller, who used sign language, nearly impossible. There is an obvious irony in the fact that Bell’s life-defining invention could be appreciated only by the hearing.

Gray makes clear the poignancy of Bell’s achievement when today the notion of an untrained individual alone in a room making a major scientific discovery is virtually unthinkable. A classic overachiever with strong philanthropic tendencies, Bell’s delight in scientific inquiry for its own sake is contrasted with the mercenary qualities of his contemporaries, particularly Thomas Edison. Bell’s hopelessness as a businessman and tendency to spread himself too thin were both endearing and frustrating to his family.

The long marriage between Mabel and Bell, while characterized by a constant struggle for balance between personal life and work – something the book sometimes belabours – was an unusually happy one based on mutual admiration and Mabel’s stalwart tolerance of Bell’s eccentricities.

Bell’s ability to produce original ideas seems to have been endless. He anticipated fibre-optics by a century with his idea of using light waves rather than wires to transmit speech. He studied genetics while the subject was in its infancy, and conducted sheep-breeding experiments at his estate in Cape Breton. He even declared that correspondence would one day be carried out electrically instead of by mail. For 20 years he focused on flying machines, and he delivered the first public demonstration of manned flight – ahead of the secretive Wright brothers.

Although Gray’s writing suffers at times from a tone of quaint primness, albeit one not unsuited to the subject matter, her ability to bring to life the social and scientific context of the day is utterly captivating. Read from the vantage point of today’s world of technological excess and instantaneity, Bell’s story is a moving character portrait and sobering reminder of how detached most of us are from the machines that now rule our lives.