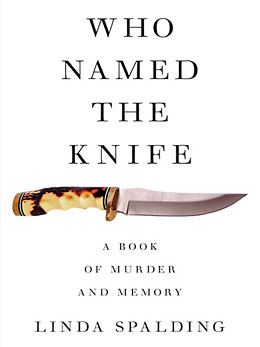 WHO NAMED THE KNIFE:
A Book of Murder and Memory
by Linda Spalding

Linda Spalding’s new book is a genre-bending examination of her relationship with convict Maryann Acker, whose role in two murders rocked Hawaii in the late 1970s. What makes the story remarkable is that Spalding herself – who, along with longtime partner Michael Ondaatje, is an editor of the literary journal Brick and the author of multiple books – served on the jury that ultimately convicted Maryann of murder and sent her to jail, where she has languished from 1982 to the present.

The problem is that Maryann was innocent. Eighteen years after the conviction, Spalding discovered the notebooks she kept during the trial and decided to try to contact Maryann. In so doing, and in recounting both her memory of the original events and their brutal personal aftermath, Spalding has created an extraordinary book that is at once a work of true crime, a memoir, an apologia, and a confessional.

Maryann’s troubles began when, as a devout 18-year-old Mormon, she hooked up with the Manson-esque William Acker, already a known criminal with several convictions to his name. Within two months of their introduction, Maryann married William and the pair set out on an armed robbery spree that led to the shooting deaths of two men.

When Maryann went to trial, Spalding became the second alternate of three in the final jury selection and eventually a full-fledged juror. After weeks of testimony, Spalding set out for the courthouse on the last day of the trial, Michael and kids in tow. Their plan was to drop off their sick dog at the vet on the way there. Without an appointment, though, the dog was sent home, which made Spalding five minutes late for court. As a result, she was dismissed from the jury and denied a say in Maryann’s fate.

The apparent tragedy of this outcome is left somewhat ambiguous, as Spalding makes it clear that at the time she was unsure of Maryann’s guilt or innocence. In any case, in short order, the jurors unanimously convicted Maryann, who was sent to prison with no possibility of parole for a minimum of 30 years.

Key to her conviction was the testimony of William Acker, who had pinned the murders solely on her. And Maryann’s inexperienced counsel was kept from the knowledge that William was not, as was generally believed, serving a life sentence without possibility of parole. To the jury, it seemed that William had nothing to gain from Maryann’s conviction. In reality, nothing was further from the truth.

When Spalding wrote to Maryann in 2000, she was amazed to find out that she was still incarcerated. This, despite the fact that William Acker confessed to the murders in a 1991 parole hearing, as well as the revelation that he has become a professional snitch, testifying in over a dozen cases and with immunity under the Witness Protection Program.

Now in her forties, Maryann was thrilled to hear from Spalding, thus beginning a long, complex acquaintance rooted in an apparent codependency: Spalding’s desperate guilt and Maryann’s own abiding need for someone to take an interest in her case – even if that person may have been partially responsible for her own misfortune.

Indeed, Spalding’s contact with Maryann, who turned out to be both likeable and articulate, opened an emotional Pandora’s box for Spalding, who admits that for 10 years she had “suffered a depression so dark that at times it swallowed [her].” Fixated on death, murder, and her inability to befriend others, Spalding repeatedly questioned whether her lateness on the fateful day was the unconscious result of her own indecision.

Spalding’s letters soon turned into visits to the California jail where Maryann is being held and where she now awaits the outcome of a writ of habeas corpus that might lead to a retrial. Time and again, Spalding notes the parallels between her and Maryann’s lives: the strict upbringing, the teenage rebellion, the desire to please men who betray them.

Spalding digs deep; dragging her every skeleton kicking and screaming from the closet. There is her abandonment by her first husband, her divorce, her relationship with her overbearing father, the death of her brother and his wife in a plane crash, and the loss of her once-vibrant mother to Alzheimer’s. If any criticism can be levelled here, it is that the book occasionally borders on a wallow. But it is a fascinating wallow, and one that is far from over, as Maryann Acker, whose original conviction was finally overturned in 2005, still awaits a retrial and possible freedom – a freedom Spalding no doubt craves for herself almost as much.