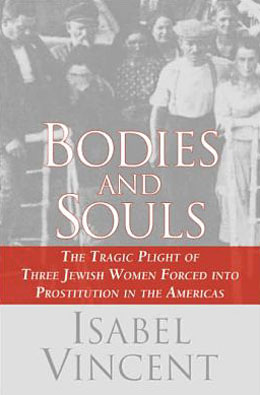 BODIES AND SOULS:
The Tragic Plight of Three Jewish Women Forced into Prostitution in the Americas
by Isabel Vincent

In Bodies and Souls, seasoned investigative journalist Isabel Vincent turns her attention to an apparently forgotten yet utterly notorious episode in history: the Jewish slave trade that forced thousands of young women out of Eastern Europe and into prostitution in Latin America from the late 19th century until after the Second World War.

Vincent, the author of two previous books and a writer for the National Post, personalizes her work by focusing primarily on the plight of three women, all of whom were lured from abject poverty with promises that ran the gamut from marriage to menial work. The organization that came to control them, known as the Zwi Migdal, was composed entirely of Jewish mobsters whose operating centres included Rio de Janeiro and Buenos Aires. In some cases, victims were even lured off their rural shtetls by family members, “uncles” who had joined the ranks of the pimps. Destitute, far from home, and unable to communicate in local languages, these women became sex slaves who often died young and alone.

Compounding this abuse, the prostitutes were considered pariahs by the more respectable Jewish communities in the New World. As such, they were denied access to synagogues and to proper Jewish burials. This makes it all the more remarkable that, despite such appalling disenfranchisement, the prostitutes gathered together and founded The Society of Truth, which gave them not only their own private synagogues, but also provided them with their own cemetery – a place that exists to this day.

This is a unique, compelling work that turns subject matter that might initially appear obscure or arcane into something immediate and visceral. Above all, it is Vincent’s distinctive style that makes Bodies and Souls so resonant. She frequently puts herself inside the shoes of her subjects, speculating on their possible motives or thoughts in a way that demonstrates an intense curiosity. There is clear empathy here, and like Vincent, we too feel frustrated by the often deliberate porousness of the truth about these women’s lives.

Comments: Comments Off on BODIES AND SOULS:
The Tragic Plight of Three Jewish Women Forced into Prostitution in the Americas
by Isabel Vincent Posted by: admin Categories: Adult Non-fiction, Reviews Tags: disenfranchisement, distinctive style, investigative journalist, jewish communities, Quill and Quire, second world war
← A WALL OF LIGHT
by Edeet Ravel
A GREAT FEAST OF LIGHT:
Growing Up Irish in the Television Age
by John Doyle →