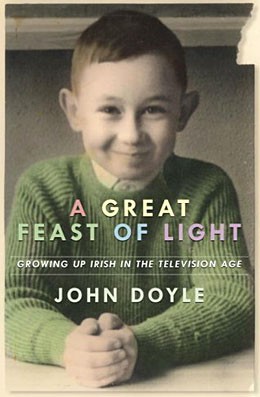 A GREAT FEAST OF LIGHT:
Growing Up Irish in the Television Age
by John Doyle

Familiar to many Canadians as The Globe and Mail’s television critic, John Doyle has written a book that is partly a memoir of his coming of age in the Ireland of the 1960s and ’70s and partly an analysis of the effect of television on what was by all accounts a repressed, insular society almost completely under the sway of the Catholic Church. It is an intriguing premise, and a refreshing change from the usual cultural critiques that equate television with the demise of literacy and the dumbing down of society. 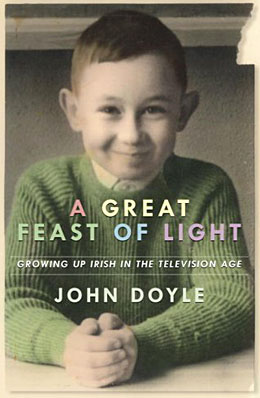 Unfortunately, the results here are spotty, as the two endeavours do not always blend seamlessly. Doyle’s prose is clear but lumbering, and the book gets off to a slow start with an account of his early years at Catholic school, the purchase of the family’s first TV set, and a description of the various local and American shows (I Love Lucy, The Man from U.N.C.L.E.) that were making an impact on the popular imagination. We hear mildly amusing anecdotes about Doyle’s warm-hearted but not particularly eccentric family members (there is much talk of “fellas” and “eejits”) and the character of the various towns they lived in until finally settling in Dublin in 1969.

The pace picks up in the latter part of the book, with the onset of “the Troubles” and engaging personal accounts of seminal events such as the infamous Bloody Sunday massacre. Doyle looks at the subversive influence of British shows such as Monty Python’s Flying Circus and even Upstairs, Downstairs, but too often it feels as if we are simply reading through a list of his favourite shows of the time – a list that differs little from those of contemporary North Americans.

In fairness, while television no doubt played an important role in the evolution of late 20th-century Ireland, this was nevertheless true in all Western societies. Doyle never convincingly makes the case that Ireland was exceptional in this regard.