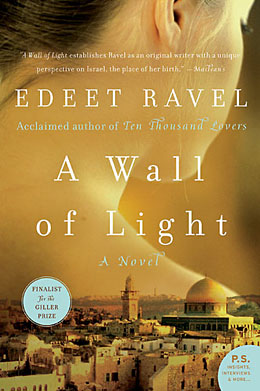 A WALL OF LIGHT
by Edeet Ravel

The first two sentences of A Wall of Light lay out the book’s main events with Melvillian aplomb: “I am Sonya Vronsky, professor of mathematics at Tel Aviv University, and this is the story of a day in late August. On this remarkable day I kissed a student, pursued a lover, found my father, and left my brother.”

The novel is the third and final installment of author Edeet Ravel’s Tel Aviv trilogy, which began with the much-lauded Ten Thousand Lovers and was followed by 2004’s Look for Me. It shares many similarities with its predecessors, most markedly its theme of idealized, unrequited love set amidst the political and cultural mayhem of modern Israel, where Ravel herself was born and still spends a good deal of her time as a social activist.

Sonya lives with her older brother Kostya, whose lawyer wife Iris was murdered. Sonya herself is deaf, which, combined with a much publicized sexual assault she experienced as a youth, has left her with the conviction that she will never marry. But her presupposition changes in a day, when she heads into Jerusalem on a near epic journey in search of a taxi driver she has decided she is in love with after a brief, nearly wordless sexual encounter.

Sonya’s story is interspersed with that of her mother, Anna, a postwar Israeli immigrant whose experiences are described through letters to her Russian lover, and with the diary entries of her nephew Noah, who eventually leaves Israel after a stint in the army to pursue art school in Berlin.

Anna and Noah’s stories are meant to flesh out Sonya’s background and provide a glimpse into other strata of Israeli society, but the three stories never quite coalesce. Ravel is a strong, politically astute writer and scholar, but the novel lacks balance as she tries to accomplish too much with Sonya’s story and too little with Anna’s, which frequently suffers from a dull aimlessness.