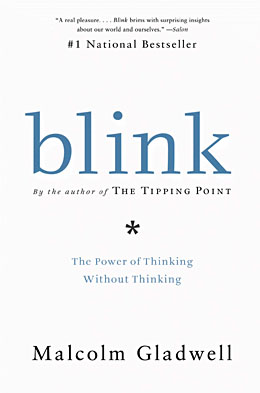 BLINK:
The Power of Thinking Without Thinking
by Malcolm Gladwell

Malcolm Gladwell, a staff writer at The New Yorker, made a name for himself with his bestseller, The Tipping Point, which looked at how small trends can suddenly and unexpectedly morph into mass phenomena. Gladwell’s new book employs his familiar eclecticism to explore a similar premise: that the rapid-fire decisions we make in the blink of an eye are actually governed by an amazingly complex series of processes.

Most of Gladwell’s examples in Blink hinge on the irritatingly named concept of “thin-slicing,” which refers to that part of rapid cognition that allows our unconscious to draw conclusions from very narrow slices of experience. It is this element of the mental process that, in one famous example, allowed an art expert to simply glance at a sculpture that the J. Paul Getty Museum had recently spent millions of dollars on and declare it a fake, despite the fact that its “authenticity” had been proven by state-of-the-art tests.

It is also what allows a tennis pro watching a game to predict an error like a double fault before it actually happens and a “speed dater” to determine in a matter of minutes the suitability of a potential mate. Asked to put words to how they drew such accurate conclusions, however, most people will fail miserably.

In Gladwell’s search for the perfect catch phrase, “blink” comes off as a bit of a dressing up of what most of us would commonly call instinct or intuition, words he only occasionally uses. Pared down to this level, some of Gladwell’s assertions may seem less than revelatory, but there are case studies here that are fascinating even beyond the point he is trying to make with them. The subjects of these studies range from war games tactics to the failed marketing of Classic Coke to the dark side of thin-slicing: the shooting of an innocent, unarmed black man by white police officers.

Despite some obvious attempts at crowd-pleasing, there is definitely food for thought here, and most readers will see reverberations from this book in many aspects of their lives.

Comments: Comments Off on BLINK:
The Power of Thinking Without Thinking
by Malcolm Gladwell Posted by: admin Categories: Adult Non-fiction, Reviews Tags: j paul getty museum, malcolm gladwell, matter of minutes, paul getty museum, Quill and Quire, thinking without thinking
← ALL TIMES HAVE BEEN MODERN
by Elisabeth Harvor
THE SAD TRUTH ABOUT HAPPINESS
by Anne Giardini →