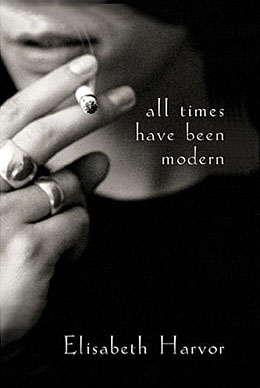 ALL TIMES HAVE BEEN MODERN
by Elisabeth Harvor

Elisabeth Harvor’s second novel opens with protagonist Kay Oleski on the verge of realizing her first adolescent sexual experience when the moment is ruined by the unexpected return home of her mother. In the next chapter, Kay is 20 and about to meet her future husband when he comes to her parents’ pottery workshop to buy a wedding gift. Within the same chapter they marry, move to squalid digs in Montreal, and then go to Europe for the year where she writes and publishes a slim novel, The Dangerous Meadow. The publication gives her a taste for the writer’s life.

Harvor continues to hopscotch along her timelines in order to bring her heroine as quickly as possible to middle age, so that the real narrative can begin. By this time Kay has had two children, divorced, and moved from Ottawa to Montreal to pursue her vocation as a writer. She is sporadically plagued by visits from her flamboyant mother, Idona, a serial divorcée now working on her third husband.

Kay has led a rather lonely existence since her own divorce, doing clerical work for her ex-husband’s cousin. This all changes when she meets Michael Galbraith, an architect like her former husband, allowing romance to again become a possibility in her life. Their mutual affection revolves around the joy of cigarettes shared on the rooftop of Galbraith’s Montreal apartment, lots of sex, and a constant attempt at witty repartee that sometimes comes across as self-conscious or affected.

All is well until the pair decide to tell their ages to each other, revealing a not-insignificant spread of almost two decades. As Kay predicts, these simple facts change everything, and Galbraith soon ends the relationship on the rationalization that he eventually wants children and requires a younger woman to fulfill this need.

All Times Have Been Modern was apparently written over a 12-year span, which may explain the novel’s lack of cohesiveness. The first chapter was originally published alone (albeit in a different form) and here feels tacked on to the larger narrative. The rest is almost like two separate novels: that of Kay’s doomed romance with Galbraith, and later, her subsequent attempt to eke out an existence as a writer while leading a subsistence life as student and teacher.

This second half is painfully prolix – more like a journal than a novel, full of unnecessary, mundane details. Harvor spends, for example, unfathomable amounts of time detailing Kay’s obsession with the cockroaches and mice she finds in her apartment, to unfunny effect.

Harvor also fails to flesh out the secondary characters and the importance of their relationship to Kay. It is unexplained, for example, why Kay refers to her mother as Idona when she is “Mother” in the first chapter. One assumes this is a distancing device, yet Kay’s real feelings for Idona are never explored. Likewise, her two sons remain flat, shadowy figures throughout the novel, bearing chummy nicknames but no salient characteristics.

The broad strokes of All Times Have Been Modern are clearly autobiographical. Like Kay, Harvor grew up in New Brunswick with bohemian/artisan parents. Harvor also lived in Europe, Ottawa, and Montreal with her husband, whom she later divorced, and also has two sons. Like Kay, she also published a single novel, worked for a very long time on her second, and had a story published in The New Yorker (unlike Kay, however, Harvor has published many other stories as well). Later in life Harvor took courses at Concordia University (disguised here as Stanopolis), where she also taught, and also taught at York University in Toronto.

This might not be worth mentioning except for the fact that it is, to a great degree, the novel’s autobiographical qualities that are its downfall. Unlike Harvor’s debut novel, Excessive Joy Injures the Heart, which focused its theme of obsession on the confined, idiosyncratic relationship between an insomniac and her guru/healer, All Times Have Been Modern feels ambling, sprawling, and, like real life, often without clear focus.

There is the sense that Harvor has become mired in the details of her own day-to-day existence, losing perspective on what is interesting and what is pedestrian. Even the title itself, part of a lovely quote from the revered composer Nadia Boulanger, offers no apparent connection with the text it purports to represent, despite its obvious poetry.

On a few occasions during the course of the novel Kay is asked to review or jury the writing of friends and colleagues. On these occasions she is honest, sometimes bruising the egos of the recipients but standing by her opinions nonetheless. It is to be hoped that Harvor herself is as resilient as she wants her characters to be in absorbing criticism of her own work, which here, unfortunately, is a disappointment.

Comments: Comments Off on ALL TIMES HAVE BEEN MODERN
by Elisabeth Harvor Posted by: admin Categories: Adult Fiction, Reviews Tags: lonely existence, montreal apartment, pottery workshop, Quill and Quire, sexual experience, unexpected return
← ALL THAT MATTERS
by Wayson Choy
BLINK:
The Power of Thinking Without Thinking
by Malcolm Gladwell →