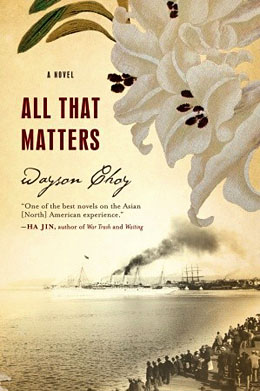 ALL THAT MATTERS
by Wayson Choy

All That Matters is Wayson Choy’s follow-up to his acclaimed first novel, The Jade Peony; both novels concern the Chens, a family caught up in the Chinese diaspora of the 1930s and ’40s.

The Jade Peony told anecdotal tales from the perspective of three of the four Chen children: Liang, the Shirley Temple-obsessed only daughter; Jung, the once-abused adoptive second son, and Sek-Lung, or Sekky, the sickly third son.

Neither sequel nor prequel, All That Matters runs chronologically parallel to the first novel, this time from the perspective of First Son Kiam-Kim, who appears as only a shadowy presence in The Jade Peony. Unlike The Jade Peony, which builds meaning through a layering of perspectives, Choy’s new work is more a coming-of-age novel set against the same turbulent historical backdrop, including the Great Depression, the Second World War, and the Japanese invasion of China.

The novel begins with Kiam’s arrival in Canada with his hard-working, conscientious father and superstitious grandmother, Poh-Poh. All three are sponsored by Third Uncle, who turns out to be not an uncle but a distant, widowed cousin who decides to adopt a “paper” family to pass on the material success he has gained in Canada. Kiam, whose own mother dies before his second birthday, comes under Poh-Poh’s care, until Kiam’s father buys a concubine to ease the load on Poh-Poh. Despite the fact that the concubine is referred to by all the Chen children – including the ones she eventually bears – as Stepmother, she is successfully integrated into the family.

The novel follows Kiam as he adapts to Canadian society, shadowing his father on his rounds in the community and befriending his closest neighbour, an Irish boy named Jack O’Connor. Readers follow the birth of Kiam’s three siblings and his evolving friendship with the difficult Jenny Chong, who eventually becomes a love interest in Kiam’s teen years.

The only character who wholly inhabits both novels is the larger-than-life Poh-Poh, who symbolizes the influence and traditions of “Old China.” Poh-Poh holds the children in thrall and often exasperates their father with her ready reliance on curses, ghost stories, and ominous foretellings. As Kiam grows older he becomes less affected by Poh-Poh’s idiosyncrasies, opting instead to embrace as fully as possible the promise of his adopted home.

Like its predecessor, All That Matters creates a believable microcosm full of fascinating cultural and historical detail. Choy also does a masterful job of balancing the stories told in each novel against each other: what is only a passing observation by a sibling in one novel is fully realized in the second, and vice versa. Sometimes dialogue is repeated verbatim to emphasize a shared experience between characters.

But despite these admirable qualities, All That Matters lacks much of the charm of The Jade Peony. Where the tripartite structure of the latter offered a more kaleidoscopic, lyrical approach, All That Matters plunges ahead in a plodding “this happened, then that happened” monotone that, by novel’s end, begins to feel tedious. Part of the problem is a distinct lack of conflict or tension between characters. The plot denouements are also ultimately undermined by the novel’s flat prose.

Comments: Comments Off on ALL THAT MATTERS
by Wayson Choy Posted by: admin Categories: Adult Fiction, Reviews Tags: coming of age novel, great depression, japanese invasion of china, material success, Quill and Quire, second world war
← THE MYSTERIES
by Robert McGill
ALL TIMES HAVE BEEN MODERN
by Elisabeth Harvor →