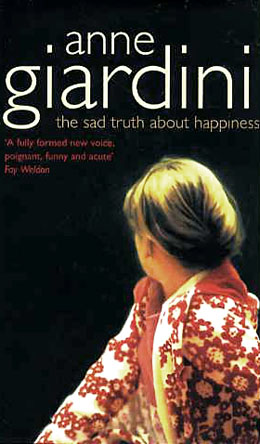 THE SAD TRUTH ABOUT HAPPINESS
by Anne Giardini

National Post columnist Anne Giardini clearly has talent, as demonstrated in the many passages in her first novel that evoke places and states of mind through a deft, though occasionally simile-heavy, use of descriptive prose. The problem here is a plot that is as cumbersome as it is improbable, a pitfall one suspects the publisher is trying to sidestep by dubbing the novel “comic” on the dustjacket. But while “lighthearted” and “bittersweet” might well describe the book’s overall tone, it most certainly is not knee-slappingly funny.

The novel is set in contemporary Vancouver; its protagonist is Maggie, an easygoing mammogram technician in her early thirties who is between relationships and taking on a new roommate, Rebecca. Rebecca writes questionnaires for various magazines on a broad range of subjects. One night over dinner she boasts to Maggie that her latest quiz can predict someone’s death to the very day. Intrigued, Maggie takes the test, but is horrified to discover she will die shortly before Christmas that same year. Equally surprised, Rebecca reviews Maggie’s answers and concludes that the key to Maggie’s imminent demise is the fact that she cannot claim to be happy.

Obsessed with this disquieting result, Maggie starts to lose sleep while asking herself what is preventing her from attaining happiness. Her increased introspection has some unexpected results. She finds herself suddenly courted by three different men, none entirely to her satisfaction. But her fortunes take an even more abrupt twist when one of her two churlish sisters, Lucy, cynically announces she will marry an old acquaintance while pregnant with the child of an Italian lover who refuses to leave his wife. Lucy goes into labour early, before the marriage can take place. Meanwhile, Lucy’s lover, Gian Luigi, discovering she is about to have his child, jets over to Canada to announce that he has obtained custody rights to her newborn child.

Maggie decides she must act immediately and steals the baby, leaving it temporarily in the care of a street person she has met only once. Later she, Rebecca, and the baby board a plane bound for Montreal, ending up in a small town where they hide out with a kindly coterie of maternal French Canadian women, one of whom acts as the baby’s wet nurse.

During this time Maggie never contacts her sister or family, assuming they will figure out that she is trying to protect the baby from being taken away to Italy. Before their return, Maggie and Rebecca hear on the news that their apartment has also burned down. Various other permutations to this frantic, absurd plot follow after Maggie returns to Vancouver with the child on Christmas Eve, having not died as Rebecca’s quiz predicted (a fact never commented on).

Giardini does not write with enough flourish or irony for readers to take this incredibly farfetched story as allegory or fantasy, two of the genres in which such events could be believable. Indeed, the first half of the novel seems a different book from the second, turning as it does from the tale of a woman questioning the path her life is taking to a wacky international caper. While there are many glimmers of potential here, the occasional poignancy Giardini achieves is lost in the tumult of this overwrought work.

Comments: Comments Off on THE SAD TRUTH ABOUT HAPPINESS
by Anne Giardini Posted by: admin Categories: Adult Fiction, Reviews Tags: descriptive prose, imminent demise, old acquaintance, Quill and Quire, rebecca rebecca, unexpected results
← BLINK:
The Power of Thinking Without Thinking
by Malcolm Gladwell
A BED OF RED FLOWERS:
In Search of My Afghanistan
by Nelofer Pazira →