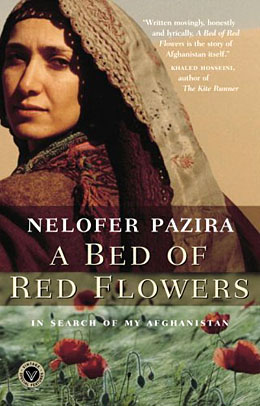 A BED OF RED FLOWERS:
In Search of My Afghanistan
by Nelofer Pazira

Nelofer Pazira, the Afghani-Canadian star of the film Kandahar, became something of a celebrity after the film was released in the wake of Sept. 11. A Bed of Red Flowers is a memoir of Pazira’s middle-class childhood in Kabul, Afghanistan – much of which was endured under the Soviet occupation – and her subsequent escape to Pakistan, and, eventually, Canada, where she lives and works today.

This is a remarkable book: an utterly engrossing read that provides a window into a culture (cultures, really) that has long existed on the periphery of the world’s vision and has all too often been a pawn in the political struggles of the superpowers. Pazira’s account exudes an unself-conscious frankness and intelligence that will give readers a perspective on the last 30 years of Afghan politics and society that simply cannot be gleaned through media accounts.

The memoir also sets the stage for the subject of the film Kandahar, a fictionalized depiction of Pazira’s return to Taliban-controlled Afghanistan to search for her childhood friend Dyana (portrayed as Pazira’s sister in the film), whom she fears has committed suicide. The book briefly describes the making of the film, but also uncovers the tragic fate of Dyana not revealed in the movie.

Pazira’s soul-searching about the ruination of her country and the life she once had eventually leads her to Moscow, where she seeks out the soldiers who once occupied her land, and even to a discussion with the mother of one of the many Soviets killed there. Pazira’s astute political sensibility combined with her enormous humanity make this a compelling read on many levels, as she provides insight into loaded cultural markers such as the burqa, but also fascinating glimpses into the nuances of Afghan society.

Comments: Comments Off on A BED OF RED FLOWERS:
In Search of My Afghanistan
by Nelofer Pazira Posted by: admin Categories: Adult Non-fiction, Reviews Tags: childhood friend, kabul afghanistan, political struggles, remarkable book, soviet occupation
← THE SAD TRUTH ABOUT HAPPINESS
by Anne Giardini
NO TIME: Stress and the Crisis of Modern Life
by Heather Menzies →