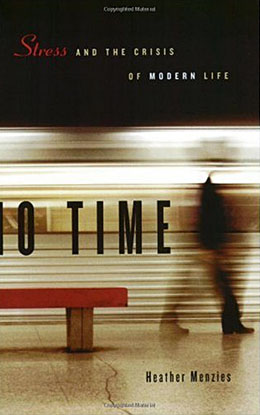 NO TIME: Stress and the Crisis of Modern Life
by Heather Menzies

It has become axiomatic that nobody has “time” anymore: time for family, time to finish a day’s work, time for introspection. And despite the ubiquity of computers and related technologies, such as email, voicemail, and cellphones, which are supposed to make our lives easier, the average person appears to be more stressed out than ever.

Heather Menzies, a scholar and authority on the effects of technology on our lives, dates this sea change from the early 1990s, when she began to observe that none of her colleagues had time for idle chatter anymore – unless the conversation was about work. No Time probes the causes and symptoms of what Menzies sees as our anaesthetization by the prevailing digital media through which we conduct our lives.

The book’s reach is extremely broad, encompassing the effects of globalization and “just in time” economics to the commodification of health care to workaholism and the pervasive spread of such conditions as chronic fatigue syndrome and ADD. She explores such recent events as the tainted-water tragedy in Walkerton, Ontario, and the shocking death by starvation of a baby while under the watch of the Catholic Children’s Aid Society. All are seen as symptomatic of a general malaise that has left individuals increasingly out of touch with society, nature, and, ultimately, their own instincts.

For the most part, No Time reads as a diatribe, with Menzies railing against the “hypermedia” environment that is cutting us off from what is real and meaningful in life. Her observations are often astute, although the book occasionally suffers from a dearth of examples to bolster some of the more sweeping generalizations. Menzies’ earnest, holistic approach values the importance of human physical interaction and exhorts us to slow the pace of our lives and return to grassroots, participatory democracy. Of benefit here would have been a balancing argument showing how digital media are also playing an enabling role in connecting people worldwide to do exactly that.

Comments: Comments Off on NO TIME: Stress and the Crisis of Modern Life
by Heather Menzies Posted by: admin Categories: Adult Non-fiction, Reviews Tags: chronic fatigue syndrome, effects of globalization, effects of technology, hypermedia environment, participatory democracy, Quill and Quire
← A BED OF RED FLOWERS:
In Search of My Afghanistan
by Nelofer Pazira
YOU MADE ME LOVE YOU
by Joanna Goodman →