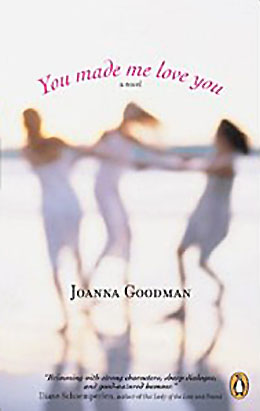 YOU MADE ME LOVE YOU
by Joanna Goodman

Sophomore novelist Joanna Goodman has written an eminently readable piece of women’s fiction about three sisters facing life-altering decisions that feels, in spirit, like a cross between Four Weddings and a Funeral and Hannah and Her Sisters.

Favourite child Jessie appears to have it all: the doctor husband, two well turned-out children, and a bustling personal organization business that acts as a thinly veiled outlet for her obsessive-compulsive disorder. But cracks are beginning to show in the veneer of her perfect life, particularly after a sexual encounter with a client sends her headlong into an abyss of fear and self-doubt.

Estelle, an aspiring film editor living in Los Angeles, is finally getting her first real break in the industry when a childhood friend re-emerges as a love interest and attempts to derail her career by luring her back to parochial Toronto. After spending most of her adulthood flitting from one bohemian interest to the next, third sister Erica has moved to New York where she is attempting to redefine herself once again – this time as a writer – while living with Paul, a prominent but somewhat Svengali-like American novelist. Erica dreads bringing Paul home to Toronto to meet her parents, Milton and Lilly, who, despite lacking piety, are Jewish enough to disdain the choice of a goy mate. It is with a vague irony, therefore, that by novel’s end it is Erica alone who fumbles into a discovery of her faith.

Goodman has crafted exceedingly believable, multi-dimensional characters and strikes just the right tone between poignancy and melodrama. The worst that can be said of the novel is that the delightfully haphazard trajectory of the sisters’ lives is a bit too tidily ephiphanic at novel’s end, each seeming to find her own “voice” at just the same time. But perhaps this is just a begrudging admission that these characters are so alive that the reader is sorry to see them go so soon.

Comments: Comments Off on YOU MADE ME LOVE YOU
by Joanna Goodman Posted by: admin Categories: Adult Fiction, Reviews Tags: dimensional characters, four weddings and a funeral, hannah and her sisters, obsessive compulsive disorder, personal organization, Quill and Quire
← NO TIME: Stress and the Crisis of Modern Life
by Heather Menzies
DON’T GET TOO COMFORTABLE
by David Rakoff →