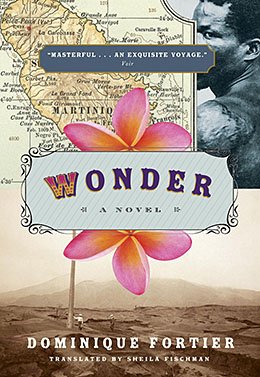 In London a mathematician sits on the cusp of a breakthrough in his theory of wave propagation as the smoke from a volcanic eruption that killed all but a single resident of faraway Martinique wafts overhead. A century later, two strangers communicate through the stones they arrange on the slopes of Montreal’s Mount Royal Cemetery.

What, pray tell, will tie these remote events and characters together? The structural riddle posed by Dominique Fortier’s new novel has become a recognizable narrative strategy thanks to works like A. S. Byatt’s Possession, David Mitchell’s Cloud Atlas, and Michael Cunningham’s The Hours. Put it in a lineup next to these massively successful novels and Fortier’s book will likely strike you as wanting. Considered away from their bright light though, Wonder (originally published in in 2010 as les Larmes de saint Laurent) is a textured and often elegant novel.

In this, it benefits from a limber translation by Sheila Fischman, whose skill and ubiquity have made her English Canada’s dominant lens into Quebec’s literature. It doesn’t hurt that Fortier, too, is a translator who has handled Canlit heavyweights like Margaret Laurence and Anne Michaels (curiously, Michaels’ The Winter Vault, whose translation by Fortier came out the same year as this book, is also about connections between seemingly disparate characters).