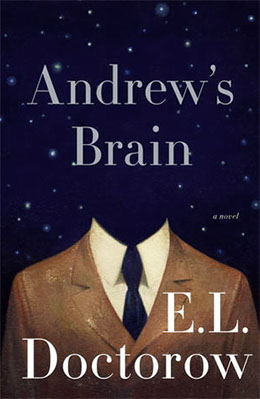 The back cover of Andrew’s Brain, E.L. Doctorow’s twelfth novel, features blurbs from George Saunders and Jennifer Egan, admired contemporary writers obviously chosen as strategic testament to the 83-year-old’s enduring relevance. Since his first novel, Welcome to Hard Times, was published in 1960, Doctorow’s books have always been praised by the luminaries of their time. If you grew up in the ‘70s, as I did, you’re likely to recall seeing the striated spines of Ragtime and The Book of Daniel on your parents’ bookshelves.

Though Doctorow has long been known for a habit of using real historical figures in his fiction—Houdini, the Marx Brothers, William Tecumseh Sherman, Dutch Schultz, Emma Goldman, the Rosenbergs, the Collyer Brothers, are but a few—his work has often veered, sometimes sharply, away from what we tend to think of as realism.

His narrators, too, have often proven unreliable. Yet this diverting riddle of a book surely reaches an apex in that regard. Andrew’s Brain is written as a conversation between Andrew, a cognitive scientist suffering from schizophrenia and bipolar disease, and a man who is presumably his psychiatrist (I’ll use it only once, but try to infer “presumably” in all sentences describing what takes place in this novel). Some of the discussions take place in an institution that, depending on how you interpret things, could be a hospital or a prison. We can’t rule out the possibility that Andrew is some kind of sardonic Scheherazade postponing the inevitable with his tale-telling.

That tale is Andrew’s life story, which we find has been marked by two major personal tragedies. His first marriage ended after he accidentally killed his infant daughter by giving her incorrectly prescribed medication. His second wife, Briony—who was his student when he was teaching at a state college—died during the chaos of 9/11, her body never found. Andrew believes she was trying to save people; curiously though, her lover from college worked in the towers.

Andrew sees these events as the logical outcome of a lifetime’s curse of bad luck. When he was a child his toboggan caused a fatal car crash. Later, when his family moved to New York, his tiny dog was torn to shreds in front of his eyes by a hawk in Washington Square Park. After Briony’s death, Andrew—hoping to avert further disaster—handed over their daughter to the care of his first wife, Martha.

Doctorow impishly poses a chicken/egg scenario: was Andrew’s current state brought on by these traumatic events or was it their cause? Andrew portrays himself as a victim, yet it’s clear there’s a certain insidiousness at play. He refers to himself in the third person, sees free will as an illusion and, though he professes to adore Briony, admits he lacks guilt and is “finally, terribly, unfeeling.” At one point, he recalls Martha’s husband describing his “well-meaning, gentle, kindly disposed, charming ineptitude” as “the modus operandi of the deadliest of killers.”

The rising dubiousness of Andrew’s claims also springs the latch on Doctorow’s wit. He goes to California to meet Briony’s parents and is shocked to discover that they are midgets. He claims George W. Bush was his roommate at Yale, a connection that got him a high-profile job at the White House, where he entertained Cheney and Rumsfeld (whom he refers to as Chaingang and Rumbum) with First Year cognitive science riddles.

Fiction could be described as a series of convincing lies, but why read a book about which we can be certain of almost nothing? Doctorow remains, as always, two steps ahead of the game: though we doubt everything his unreliable narrator says, we find we believe in a truth he’s being unreliable about.