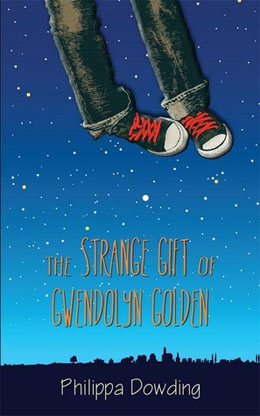 THE STRANGE GIFT OF GWENDOLYN GOLDEN
by Philippa Dowding

This lively, fast-paced novel by the author of the Lost Gargoyle series moves fluidly from the whimsical to the fantastical and takes an intriguing detour to some dark places in between.

Fourteen-year-old Gwen Golden wakes up one morning to find herself bobbing on her bedroom ceiling like a balloon. A touch to the bedpost brings her plummeting to the ground, but the phenomenon keeps repeating itself at inconvenient times, like when she’s at school. Though her friend Jez stands by her, Gwen’s strange behaviour doesn’t help her case with the kids at school, who start spreading the rumour she’s on drugs.

It’s the local candy-store owner, Mrs. Forest, who reveals the truth: Gwen is a Night Flyer, a rare group of humans with the power of flight. Mrs. Forest, a Flyer herself, is to be Gwen’s Mentor. She gives Gwen a handbook (the cover proclaims it to be a Micro-Edition for the Less-Than-Willing Reader), which explains that the ability to fly is triggered by the onset of puberty. And indeed the handbook’s style hilariously imitates public health clinic pamphlets. A Q&A provides answers to pressing questions like What is happening to me? How do I control my flying? or What ceremonies and parties do I attend?

Gwen’s power comes with new responsibilities. It also has a dark side, as powers often do. The euphoria of flying means that, like Icarus, there’s a risk she’ll fly to close to the sun; and she discovers there’s a sinister force that has the potential to overwhelm her. The ability to fly is usually passed on from parents, and since Gwen’s mother isn’t a Flyer she starts to suspect her ability is connected to the sudden disappearance of her father seven years ago.

Dowling knits a variety of elements together—puberty, hidden talents, independence, reconciling with loss—with a satisfying balance between humour and seriousness; this is an accessible story that readily lends itself to both metaphorical and literal interpretations. Dowling’s open ending suggests we might be hearing more from the Night Flyers, and that will be welcome news for many readers.

Comments: Comments Off on THE STRANGE GIFT OF GWENDOLYN GOLDEN
by Philippa Dowding Posted by: admin Categories: Reviews, YA & Kids Tags: Fiction, Quill and Quire, YA
← ALL THE BROKEN THINGS
by Kathryn Kuitenbrouwer
ANDREW’S BRAIN
by E. L. Doctorow →