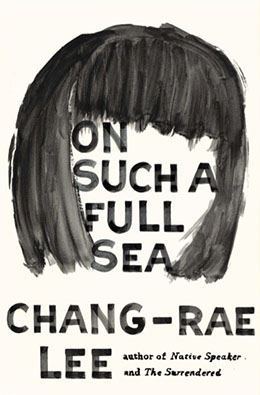 ON SUCH A FULL SEA
by Chang-rae Lee

In his four previous novels, Chang-rae Lee established himself as a reliable teller of tales about immigrants, most of them, like him, Asian-Americans. On Such a Full Sea is also about immigrants, but none you’ve ever met. That’s because Lee has ventured for the first time into speculative territory, a move that, in combination with his genteel but unshowy prose (he has been compared to Kazuo Ishiguro), pays off in eerily compelling ways.

Fan, Mitchell’s 16-year-old heroine, lives in latter-day Baltimore, or B-Mor, as it’s been called since an undefined environmental catastrophe laid waste to earth’s economic powers. Fan descends from the “originals”— immigrants who came from so-called New China to repopulate America over a century ago.

B-Mors, the middle of three sharply defined social classes, live safe but exceedingly mundane lives watching “pix and vids” at home or taking in the “seasonally perfumed, filtered air” of the mall. Managed by an unseen directorate, their livelihood is based on the supply of farmed fish—Fan performs the solitary underwater work of cleaning the tanks—and vegetables to the top-ranking Charters, white-collar types who live lavish lives (though they are vulnerable to economic hardship) in the faraway villages.

B-Mors call to mind the cloistered fabricants of David Mitchell’s Cloud Atlas who serve the unseen “purebloods” in his dystopian Korean corporate state. Like them, B-Mors live in toxic environments, have short lives and are kept complacent through limited access to the outside world.

Though On Such a Full Sea’s third-person narrator, speaking on behalf of the B-Mors, states emphatically that B-Mors aren’t drones, “we” does concede that for them the concept of individuality has essentially become moot. B-Mors’ lives are so monotone, so predictable that conversations seem pointless; even family carries no special meaning anymore.

And yet, as the novel begins Fan, like Mitchell’s Sonmi-451, has just done the unthinkable: voluntarily leave B-Mor. Most assume she’s looking for her boyfriend, Reg, who mysteriously disappeared after he was found to be the first “C-free” B-Mor (cancer plagues everyone in this new world, but only Charters have the financial means to treat it). Nevertheless, the incident has deeply shaken B-Mors’ confidence in the desirability of their lot.

Taciturn Fan is a cipher. We’re mostly forced to guess her thoughts though her actions, which are consistently bold and instinctively selfless. We’re aware she has a secret: she is pregnant, and though this fact doesn’t seem to cause her any particular anxiety, she tells no one, hedging her bets that it’s more likely to work against her.

The first person Fan encounters after leaving B-Mor is Quig, an ex-Charter veterinarian who gives medical services to the lowest of the low—the counties dwellers—in exchange for goods, or their daughters. Fan’s status with Quig feels tenuous until she performs a heroic act during a harrowing encounter with a nefarious family of circus performers. Later, she ends up at the home of a wealthy Charter named Mister Leo, where for a time she is forced to take her place with a harem of captive girls who have depicted their experiences on a massive mural in their quarters.

On Such a Full Sea is like many tales in which the hero leaves the sheltered comfort of his or her home—think Frodo’s Shire, Dorothy’s Kansas—for a series of adventures in an unfamiliar and sometimes hostile world. Still, its disorienting plot twists, sudden changes of mood and elegant writing feel beholden to no particular genre. By confidently veering off his own well-trodden path, Lee has gambled and won; this is a beguiling story that also happens to double as an insightful social critique.

Comments: Comments Off on ON SUCH A FULL SEA
by Chang-rae Lee Posted by: admin Categories: Adult Fiction, Reviews Tags: Fiction, Toronto Star
← WONDER
by Dominique Fortier
ALL THE RAGE
by A.L. Kennedy →