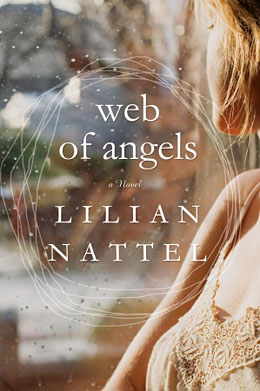 WEB OF ANGELS
by Lilian Nattel

E.M. Forster first put forward the notion, now gospel in most high school English classes, that in fiction characters are either “flat” or “round.” Flat characters, with their meager one or two personality traits, are the novel’s one-trick ponies. Dickens’ work, Forster argued, was lousy with them. Protagonists are generally expected to be round—that is, complex, malleable and capable of personal growth. A successful novel, your teacher probably told you, usually has a few of the former and at least one of the latter.

The heroine of Lillian Nattel’s impressive third novel has dissociative identity disorder (DID), which makes her seem, paradoxically, both flat and round. Although the affliction’s previous name, multiple personality disorder, is considered outdated, people with DID nevertheless refer to themselves as “multiples” (those without DID, conversely, are “singletons”).

Sharon Lewis has a series of rotating personalities—or “alters”—that step into service on an as-needed basis. These alters don’t just have different traits, they also have different abilities. “Sharon,” the default alter, is the consummate homemaker who crafts and bakes with her kids, while Lyssa, a perpetual 16 year old, does neither. Alec, the beer-drinking male alter, is awkward socially but a crack shot with a rifle; Callisto is the stoic, hoarse-voiced protector; Ally the little girl forever fearful of her parents’ disapproval.

Sharon lives in an unflashy, middle-class Toronto neighbourhood called Seaton Grove (modeled on Seaton Village, the former unincorporated town west of the Annex) with her half-Jewish, half-Chinese husband Dan and their three children. Like many people with DID, Sharon’s condition is the result of childhood abuse. For a long time, no one knew Sharon was multiple: not Dan, not Sharon’s best friend, not even Sharon herself, until the birth of her third child led her to the therapist who finally put a name to the behavior she could no longer rationalize.

When she learns that Heather Edwards, the pregnant, teenaged sister of her son’s girlfriend, Cathy, has shot and killed herself, Sharon’s grip on reality once again begins to loosen. Although Heather and Cathy’s physician mother has been widely praised for the sang-froid that allowed her to perform an emergency C-section with a kitchen knife minutes after her daughter pulled the trigger, her heroism has also made a lot of people, especially Sharon, uneasy.

It’s not so much the grisliness of the events around Heather’s death that bothers Sharon so much as her intuitive sense that something more sinister is at play. But it’s only when Cathy begins spending more time at Sharon’s house that she’s finally able to put her finger on it: Cathy, like Sharon, has the ability to “switch.”

From here, Nattel injects some bona fide thriller-ish suspense into the mix. To prevent the further tragedy she feels is inevitable if she doesn’t act, Sharon must collect the necessary evidence to prove that Cathy’s home life is not what it appears to be. It’s a delicate task, not only because Sharon—or Alec in this case—must involve the police, but also because it requires that she and Cathy align, like a lunar eclipse, the right alters at precisely the right time.

Nattel, an abuse survivor herself, has described Web of Angels as a calling, and it’s one that for the most part she answers with uncommon elegance. That being said, the novel occasionally slips—unavoidably perhaps—into public service announcement mode, particularly in the scenes involving Sharon’s therapist. And while the novel’s presentation of DID is nuanced and careful, its portrayal of the abusers that precipitate it is not. As a result, we’re left wondering how it is that well-paid professionals could be motivated to sexually exploit their own children for financial gain. By making one parent a pediatrician and the other a professor of ethics, Nattel emphasizes the valid point that abusers come from all walks of life. Still, the obvious irony feels a bit heavy-handed.

Criticism aside, Nattel is a talented writer who has excelled at de-mystifying a phenomenon that, on the surface, is deeply mysterious. She has also created a character who is uniquely sympathetic and compelling despite the obvious difficulty of doing so—one whose many flat surfaces add up not to something round, but rather to something prismatic, intricate, and even beautiful.

Comments: Comments Off on WEB OF ANGELS
by Lilian Nattel Posted by: admin Categories: Adult Fiction, Reviews Tags: Globe and Mail
← UNDER THE MOON
by Deborah Kerbel
PEOPLE WHO DISAPPEAR
by Alex Leslie →