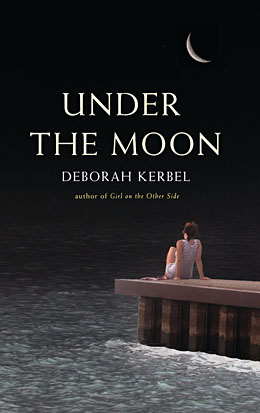 UNDER THE MOON
by Deborah Kerbel

An introvert with a habit of swearing in French and classifying people as fonts, 15-year-old Lily MacArthur has never been popular at school and doesn’t want to be. Lily’s closest friend is her Aunt Su, a pot-growing, muumuu-wearing eccentric who lives alone in a cabin in the woods where she churns out popular romance novels.

Family tension ratchets up considerably after Aunt Su unexpectedly dies (she has secretly had cancer for years) and bequeaths the bulk of her estate to Lily. Aunt Su also leaves her niece with the decision of how to dispose of her cremated remains, which Lily refers to as the “pomegranate jar-of-death.”

Suffering from insomnia in the wake of her aunt’s demise, Lily takes to wandering the streets of her small lakeside town, aware that she’s dangerously close to the limit of how long humans can go without sleep before they die. It’s during one of her nocturnal perambulations that Lily meets Ben Matthews, a teen from a wealthy Toronto family who’s just moved to town and works the graveyard shift at the local fast food joint. Lily is attracted to Ben but also confused: why would a rich kid need a job, let alone one that has him falling asleep at school during the day?

While quite a bit of the book feels like standard YA fare – we’ve met the misunderstood only child with the domineering mother and scattered father before – and while Kerbel’s details sometimes feel a little sketchy, there’s enough here that defies expectations to make this funny novel worthwhile.

Comments: Comments Off on UNDER THE MOON
by Deborah Kerbel Posted by: admin Categories: Adult Fiction, Reviews, YA & Kids Tags: cabin in the woods, charity worker, general macarthur, graveyard shift, Quill and Quire, swearing in french
← THE CAT’S TABLE
by Michael Ondaatje
WEB OF ANGELS
by Lilian Nattel →