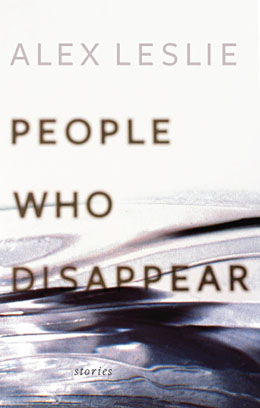 PEOPLE WHO DISAPPEAR
by Alex Leslie

The title of Alex Leslie’s affecting first collection of stories also serves as a unifying theme. Set in towns and cities, and along the winding coastal highways and obscure logging roads of British Columbia, these are indeed stories about people who disappear – sometimes by choice, sometimes not, and in a variety of ways: literally, figuratively, emotionally, historically.

Many of Leslie’s stories centre on gay relationships and often focus on the difficulty of being “out” in a small community. The narrator of “The Coast Is a Road” accompanies her journalist lover as she “roams the coast like an indigenous seabird” in search of stories. The journalist’s purposeful wanderlust is set in contrast to the narrator’s dependent lassitude. The story is the most lyrical of the bunch, awash in lovely descriptions like, “Whale backs sink dark ink into polished water” or, “The snowy road balanced against the side of the dark mountain, the ultrasound image of a bone inside an arm.”

Archeology and the buried past serve as subjects or backdrops for three pieces: “Ghost Stories,” about a girl and her uncle who scour the forests for traces of abandoned mining towns; “Face,” about a group of kids who discover ancient bones on a construction site in their rapidly changing neighbourhood; and “Preservation,” about an open pit filled with the remains of prehistoric creatures that serves as a trysting place for a pair of female lovers fated to be driven apart.

In “Like Mind,” a young woman reflects on the trail of broken friendships left by her friend William’s mental illness as she drives him around Vancouver to pick up furnishings he sourced on the Internet for his new apartment. The collection ends with “Long Way from Nowhere,” another very strong piece in which the relationship between an itinerant homeless man and the girl he claims is his daughter gets blown apart when she is kidnapped by tree-dwelling activists at a logging site.

Leslie is a young writer with a particular talent for balancing universal themes and modern-day preoccupations. A very promising debut.