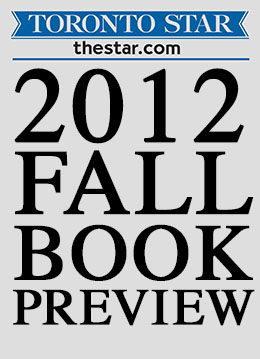 Fall is to the book business as summer is to the film industry, with publishers launching their biggest potential blockbusters to take advantage of festival season and prime the pumps for Christmas shopping. The season is looking particularly promising fiction-wise, so much so that we had to bump a number of notables — Michael Chabon, Shauna Singh-Baldwin, Barbara Kingsolver, Martin Amis, David Foster Wallace and M.G. Vassanji among them —in order to balance out our list with dashes of memoir, non-fiction and a graphic novel. Here are some of the most anticipated and interesting titles coming soon to a bookstore near you:

A new collection of Alice Munro stories is, like the birth of an exotic animal in captivity, always cause for celebration. The 81-year-old author’s cautionary tales of girls and women who fall victim to their own unworldliness or bad decisions bear out, yet again, the endless hyperbole. ED

One of the rising superstars of the CanLit scene, Rawi Hage continues to get just a bit weirder with every book. His latest has a circus-raised taxi driver named Fly observing all of the strange performances that take place in the city during carnival season. AG

McEwan eschews the brain surgeons and scientists of his previous novels to pal around with his contemporaries (a fresh-faced Martin Amis gets his own walk-on part) in this Cold-War set story about a beautiful, novel-obsessed Cambridge math grad (the writer’s first female protagonist since Atonement) who falls for her target after being recruited by MI5 to work on a cultural propaganda operation. ED

Everything goes better with zombies, doesn’t it? Corey Redekop serves up a broad splatter satire when a Toronto actor awakens mid-way through his own postmortem with an insatiable hunger for human flesh. Obviously not to everyone’s taste, but there’s always dmore going on in the best zombie stories than meets the eye. AG

Dominican-born, Pulitzer Prize-winning Diaz has focused on the lives of immigrants like himself in his gutsy, street-smart prose. The theme of his second collection of stories is love, and if there’s anything original left to say about the subject you can be sure Diaz will find it. ED

Sequels and serials seem to be all the rage these days. Annabel Lyon follows up the commercial and critical success of The Golden Mean with this story of Aristotle’s daughter Pythias trying to make her way in an irrational world after her illustrious father’s death. AG

Brilliant, unorthodox Young joins the recently formed club of rock heavyweights (Keith Richards, Bob Dylan, Patti Smith) who’ve decided to commit to paper all they can remember of their turbulent, drug-addled heydays. “I felt that writing books fit me like a glove,” Young has said, and chances are his legion fans will feel the same way about reading them. ED

There’s no denying Tom Wolfe is an uneven, hit-and-miss author (with rather more misses than hits lately). Set in Miami, Back to Blood promises to get the master back on track with another fat and frantic panorama of lives high and low in contemporary America. AG

Topping the list in the “unignorable literary event of the season” category is the Harry Potter author’s first book for grown-ups (as if they hadn’t been reading them all along anyway). The novel, described as “blackly comic,” portrays a bucolic English town that degenerates into internecine war after the sudden death of a parish councillor. ED

C. P. Boyko bids fair to be a breakout name with this sharp collection of stories and novellas taking aim at the mental health profession. A smart, funny book, and possibly therapeutic as well. AG

Despite winning the Nobel Prize for Literature in 2006, Orhan Pamuk is nowhere near as well known here as he is in his native Turkey, where he’s a literary supernova. Set in a small Turkish village and told from the rotating perspectives of family members visiting their matriarch on the eve of the 1980 coup, this long overdue English translation (the novel was originally published in 1983), makes necessary steps toward correcting the imbalance. ED

Cordelia Strube’s novels, always well written, have an uncompromising, edgy quality that raises them above the level of most contemporary satire. Her latest has an actor named Milo whose life is falling apart in a spectacular yet familiar way. And of course things are bound to get worse before they get better. AG

Chris Ware’s latest offering, which he boasts “has no deliberate beginning nor end,” is one the hottest graphic novel events of the year, and for good reason. Delectably packaged as a boxed set of little comics, Ware’s stunningly intricate panels delve into the lives of the residents of a three-storey Chicago apartment building. ED

The last part of a complex trilogy that’s been on hold for a while, Ancient Light is a memory novel narrated by an actor recalling the passions of his youth. But what it’s about doesn’t really matter. Banville is such a wonderful writer he could make a software manual sound ravishing. AG

The Irish-Canadian writer follows up her smash hit Room with fourteen “fact-inspired fictions” based on her travels in North America over roughly the same number of years. Donoghue describes the characters peopling her narratives as “emigrants, runaways, drifters; gold miners and counterfeiters, attorneys and slaves.” ED

16. THE WOES OF THE TRUE POLICEMAN by Roberto Bolaño. Hamish Hamilton, $32, November, 256 pages

You have to wonder just how much unpublished Bolaño stuff there is left out there. This latest, unfinished novel (supposedly his last, but don’t bet the farm on it) returns us to 2666 territory as a university professor gets involved in various sinister goings-on in a northern Mexican border town. AG

In her new book Smith returns to her native northwest London (ergo NW), also the setting of her wildly successful first novel White Teeth, written when she was a dewy-eyed pup in her early 20s. Smith’s natural intelligence and copious personal charm have sometimes struggled to materialize on the page, but by all accounts the needle seems to be tipping into positive territory for this class-driven story about an intertwined group of friends living on a housing estate. ED

If anyone’s going to re-visit the story behind Leonardo’s “Last Supper” and make it interesting for a post-Da Vinci Code audience, it’s going to be Ross King, a historian with a real knack for writing popular biographies of great works of art. AG

Rushdie pens a much-anticipated—and at 600-plus pages presumably thorough—account of his life underground after Iran’s Ayatollah Khomeini sentenced him to death for perceived slights to Islam in his 1988 novel The Satanic Verses. An amalgam of two of his favourite authors’ first names, Conrad and Chekhov, “Joseph Anton” was Rushdie’s handle during his years couch-surfing with famous friends including Ian McEwan and Christopher Hitchens. ED

Marjorie Celona’s debut novel about a girl’s quest to understand all the reasons why she was left at the doorstep of the YMCA as a baby was the target of a bidding war among several Canadian publishers. That’s not necessarily a seal of approval, but Celona does have a track record as an excellent short story writer (which is what Y started out as), and there’s a lot of buzz over this one. AG