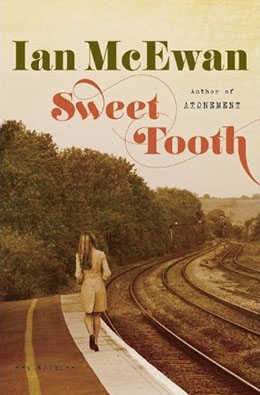 Fledgling writers are often told, “Write what you know.” Ian McEwan has almost always done the opposite. Ergo his penchant for depicting science and scientists, whose professions he researches with the disciplined rigour of a method actor. For 2010’s underrated Solar, McEwan versed himself in cutting-edge solar technologies to determine which his Nobel-Prize winning character Michael Beard might plausibly champion. For the astonishing descriptions of neurosurgery in Saturday McEwan personally observed, supposedly with unflappable cool, operations that can bring medical students to their knees. An appropriate response to anyone who says that McEwan’s work isn’t rocket science is “No, not yet.”

Given this occupational wanderlust, it comes as something of a surprise to find McEwan hanging so close to home in 1972 Cold War-set Sweet Tooth. In his portrayal of Tom Healy, a struggling novelist unknowingly funded by British security service MI5, McEwan rather flamboyantly casts a number of his contemporaries—writers and publishers both—in walk-on parts. Martin Amis (who along with the late Christopher Hitchens, to whom the book is dedicated, is one of McEwan’s closest friends) gets a particularly thorough if indirect back scratching. At a reading, Tom’s fashionably grim, post-apocalyptic novel is spectacularly upstaged by Amis’ “obscene, cruel and very funny” The Rachel Papers. Taking the stage, Healy feels “the whole room resenting him for undoing the merriment.” Afterwards, Amis offers him a triple scotch in lieu of encouragement.

Serena Frome, a beautiful, blonde, chess-playing Bishop’s daughter, is ostensibly McEwan’s first female protagonist/narrator since Atonement (that “ostensibly” unfortunately has to hang, no spoilers here). Despite having studied math at Cambridge, Serena prefers reading novels, which she devours voraciously. Her interests make Serena ripe for recruitment into MI5’s operation “Sweet Tooth,” whose aim is to turn writers with naturally pro-establishment, anti-Soviet views into unwitting propagandists by funding them through a spurious grant organization.

Posing as a foundation representative, Serena informs an incredulous Tom that his financial worries are over then goes wildly off message by embarking on an affair with him, one fuelled, initially at least, by Serena’s perception that she’s been spurned by Max, her love interest at MI5. McEwan has always had a habit of writing plots anchored by rash decisions or devastating events—Briony’s rape accusation in Atonement, the balloon accident in Enduring Love, the child who disappears in Child in Time. Needless to say, Serena’s indiscretion provides the push that gets things moving rapidly downhill.

At this point in his career, McEwan is arguably too big to fail. Sweet Tooth is indeed chockablock with many of the qualities that have built his shining empire: innocuous sentences that discreetly build to spellbindingly vivid paragraphs, uncomfortable sex and an old-fashioned embrace of suspense. There are a number of brilliant, funny, scenes, including one in which Serena emasculates Tom with a classic probability problem (the infamous “Monty Hall paradox”) after he patronizingly asks her to tell him an “interesting” story about math. Later, he show-offishly tries to work the problem into his novel but still gets it wrong.

But there are also leaks in McEwan’s normally watertight housing. Early in her assignment, Serena becomes aware that agency “watchers” have cased her apartment, yet her flagrant cavorting with her target elicits no reaction for months. Despite his reputation as a cerebral rationalist, McEwan often pushes the boundaries of the credible. Credulity, however, has not kept pace with yoga wear when it comes to elasticity and the novel’s ending comes off as something of a groaner. The constant insider references are also a tad clubby, although it’s safe to say many readers will revel in them for this very reason.