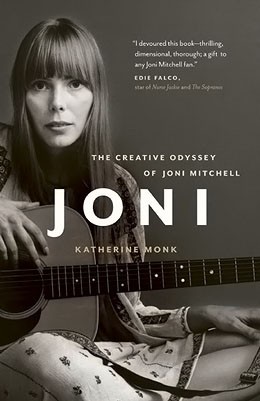 JONI:
The Creative Odyssey of Joni Mitchell
by Katherine Monk

In her acknowledgments, Katherine Monk thanks “every writer who’s ever written anything about Joni Mitchell,” without whom “this book would not have been possible.” She means this literally. Her new biography of the iconic Canadian singer-songwriter relies exclusively on secondary sources, most of them previously published interviews and biographies. When one of Mitchell’s “last remaining business representatives” told Monk the notoriously prickly singer no longer grants interviews, Monk appears to have accepted the assertion at face value, which is odd given her background as a journalist, and her own observations about Mitchell’s tendency to change her mind. The singer, Monk notes ruefully, has “retired from the business so frequently not even she can keep count of her departures from the poker table.” 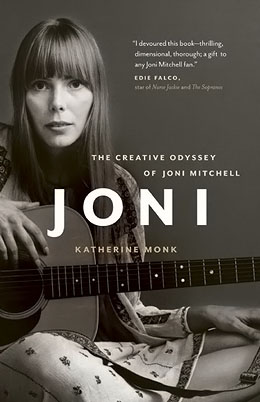 Monk’s motive for writing this book is a bit hard to grasp, as she admits to not being a huge Mitchell fan “before all this started.” Once she had begun, she was confronted with the “huge problem” of how to “add anything original to the already exhaustive amount of Joni material without any new Joni Mitchell musings.”

Her solution is to focus on Mitchell’s “various creative challenges and life themes,” which she groups into nine chapters with alliterative titles such as “Impersonation and Identity” (about Mitchell’s “history of defying gender”); “Expecting and Expectation” (touching on the musician’s brief marriage to Chuck Mitchell – a “nice-faced folksinger from Detroit with a mild degree of fame” – which resulted in the daughter she gave up for adoption); and “Myth and Mythmaking” (which looks at Mitchell’s legendary non-participation in the Woodstock music festival of 1969).

Far too much time is spent, however, on awkward metaphorical musings about art, authenticity, and “the creative process.” To take just one of many cringe-worthy examples (and a mixed metaphor to boot): “[Mitchell] was more of an artist-astronaut, extracting the ore of human meaning from the act of personal creation.” Although Monk promises not to deliver “a fawning chronicle of a life,” she appears to buy wholeheartedly into Mitchell’s own ego-driven self-mythologizing, including her well-publicized criticisms of Bob Dylan and Leonard Cohen on the grounds that they were inauthentic and imitative. Monk’s sources often seem random – why, for instance, is the opinion of Sopranos actress Edie Falco important?

“Joni Mitchell’s creative courage certainly stoked my personal furnace, and changed my life,” Monk declares. Her enthusiasm is, regretfully, not infectious, and this uneven compendium ends up stoking little else.