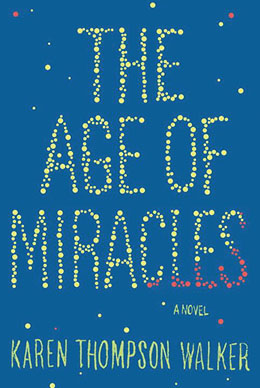 THE AGE OF MIRACLES
by Karen Thompson Walker

“I would come to think of those first days as the time when we learned as a species that we had worried over the wrong things: the hole in the ozone layer, the melting of the ice caps, West Nile and swine flu and killer bees. I guess it never is what you worry over that comes to pass in the end. The real catastrophes are always different—unimagined, unprepared for, unknown.”

Julia, the narrator of Karen Thompson Walker’s haunting and affecting first novel, is looking back from an unspecified point in the future on her 11-year-old self, on the year the earth’s rotation started to decelerate in a phenomenon dubbed “the slowing”; a process that, once begun, continued unabated until the rapidly accumulating minutes and hours caused day to overtake night and vice versa.

Julia’s family lives in an older California suburb whose homes, with their “stucco exteriors and asbestos in the ceilings and the walls” and well-kept “but not obsessively so” yards with “daisies and dandelions scattered amid the thinning grass” suggest flawed reasonableness rather than shuttered environmental insensitivity. Diversity here being religious rather than ethnic, Julia’s family’s own “bloodless breed of Lutheranism” co-exists easily alongside the practices of their Jewish and Mormon neighbours; until, that is, the slowing starts to highlight their differences. Julia’s Mormon friend, Hanna, leaves for Utah only to return, disheartened, after Jesus fails to make his promised appearance.

Walker charts the chilling effects of the slowing through simple, resonant details. Large, non-suburban birds—hawks and eagles—show up shortly before songbirds start dying en masse. Tides swell. Balls don’t bounce as they once did. The long, frigid nights and scorchingly hot days eventually pass “the wheat point,” meaning that food can only be grown under artificial light. Like countless others, Julia’s mother suffers from an insidious illness brought on by changes in the earth’s gravity.

Concerned about crashing stock markets and abandoned schools, the government orders its citizens to stick to clock time. But a schism quickly arises between those who conform to the directive and “real timers”—the contrarian hippie/libertarian element that chooses to follow the sun. Shunned by clock-timers, the latter move to the desert, where they establish a clock-free colony known as Circadia.

The Age of Miracles bears some striking similarities with Tom Perrotta’s recent end-of-days novel The Leftovers, about the micro and macro reordering of society that takes place in the wake of a rapture-like phenomenon. Affairs, for instance, are a by-product of imminent global collapse in both books. But where Perrotta’s satire quickly descends into cartoonishness, Walker’s tone is unflaggingly calm, nuanced, inexorable. Her novel has a quiet relentlessness that feels, in a word, real.

While the adults mitigate panic by squirrelling away canned goods in hastily built shelters, Julia finds herself subject to a force—adolescence—that feels, at times, more powerful than the one putting the brakes on the planet. Unlike the state’s once-calamity-proof eucalyptus trees, catty cliquishness proves impervious to global catastrophe and Julia soon finds herself isolated from her old friends.

It’s with Seth Moreno, a quiet boy from school, that Julia discovers a wellspring of untapped, pre-sexual emotion. Watching Seth futilely pour cups of water on a dying, beached whale, Julia feels “an urgency like love”; a poignant blooming we know will be brief.

Elegant, elegiac and powerfully resistant to the gravity of being put down, The Age of Miracles is one of the year’s strongest debuts. Enjoy it, but with the caveat that unless you’re the type to bring Jaws to the beach, don’t read it, as I foolishly did, during a heat wave.