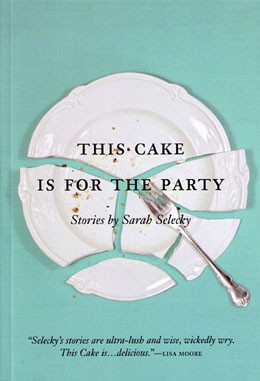 THIS CAKE IS FOR THE PARTY
by Sarah Selecky

Although many characters inhabit Sarah Selecky’s engaging debut collection of short stories, they tend to drift toward a certain default sensibility: urban-dwelling females in their mid-twenties to thirties poised on the cusp of marriage and motherhood. Characters, that is, with a sense of possibility to their lives but who still struggle valiantly to find the right path. 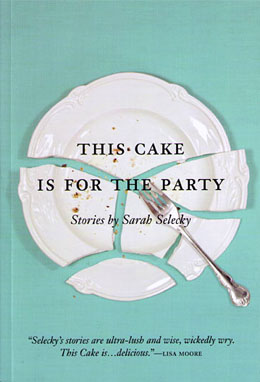 At least one of these stories takes place out west, but most have a distinctly Ontario feel: Peterborough, Toronto, Haliburton and Sudbury are all called upon as backdrops. Selecky, needless to say, assumes her readers know what a humidex rating is.

These are characters busy with the important work of breaking up or being tempted by one another (there are enough affairs and violations of confidence to make them seem like something of a preoccupation). Notably absent, however, is any malevolence or sense of judgment, perhaps because so often their attempts at sophistication are undercut by revelations of their vulnerability and awkwardness.

To do this, Selecky relies to great effect on subtle wit, thoughtful dialogue and condensed, encapsulating gestures. In Standing Up for Janey, for instance, Bonnie gamely hosts a dinner for her soon-to-be-married (but adulterous) best friend despite her own recent break up. In it we get this typically Seleckian exchange:

I found a marvellous balsamic Olivieri’s last week, she tells me. She tugs at the knife to pull it out. Aged, she murmurs. It pours like a syrup.

I like Olivieri’s, I say, and try to think of a good reason for saying this. I add: Their cheeses.

Don’t you just? She responds, ripping a small piece of bread off the loaf.

In Throwing Cotton, two couples gather at the cottage they have rented for the last few years. Sanderson, an insecure, flirtatious art professor whose wife, Anne, is one of his former students, has had too much to drink and is starting to grate on everyone’s nerves with his arrogant holding forth. When he mangles a familiar expression—saying he is “throwing cotton to the wind”—he is perfectly and instantly deflated despite his friends’ snickering assurances that his mistake is understandable.

Some of Selecky’s best stories come near the end of the book. In Where Are You Coming From, Sweetheart? a 14-year-old Sudbury girl, fed up with the religious admonitions of her widowed father, has made the decision to go live with her aunt in Mississauga. Returning home to break the news, she puts her coming of age on fast forward by making out with a seedy stranger at the back of a Greyhound bus not knowing her father’s dead body awaits her.

In Paul Farenbacher’s Yard Sale, Meredith attends a sale of the belongings of her neighbour who has just died of cancer. Farenbacher’s snarky son Trevor, who Meredith recalls once drunkenly kissing while falling into an ice dispenser, aggressively haggles over prices while his unfaithful widow offers Meredith the unwelcome information that she and her husband had had “an arrangement.” Meredith had adored Farenbacher, an attachment she explains in this way:

Paul Farenbacher’s lightly accented English sounded knowledgeable and wise to me, and his prematurely white hair and beard, trimmed with precision, so white that it dazzled against his toast-coloured skin, made him look like a wizard or scientist, equally capable of saving me from the mysteries of the paranormal and the evils of humanity. The truth was that I felt safer with Paul Farenbacher than I did with my own father. My father—whose car insurance had increased exponentially from the number of fender-benders he caused every year; who, when helping me with my math homework, poured a liberal amount of Canadian Club into one of our sunflower-printed gas station collectible tumblers, calling it his “magic formula revealer” . . .

The book’s charming title is from a story that was apparently cut from the collection, but it works anyway, conveying as it does Selecky’s off-the-cuff succinctness and obvious pleasure in everyday speech. Although her stories can be chilling—particularly in the case of One Thousand Wax Buddhas, about a candle maker who succumbs to mental illness, and How Healthy Are You?, about a woman’s memory of her participation in the testing of a mysterious drug—Selecky is never what you’d call dark. This is a writer who is good at being open-ended without leaving us dangling.

Not every story here is a gem, but there seems no doubt Selecky’s characters will continue to grow alongside her, and that is a cheerful prospect indeed.

Comments: Comments Off on THIS CAKE IS FOR THE PARTY
by Sarah Selecky Posted by: admin Categories: Adult Fiction, Reviews Tags: short stories, Toronto Star
← THE LINE
by Olga Grushin
A MAN IN UNIFORM
by Kate Taylor →