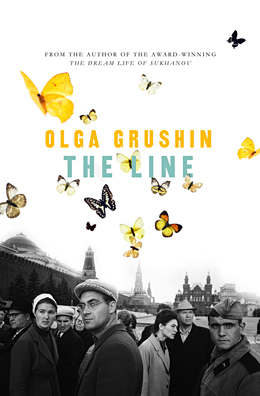 THE LINE
by Olga Grushin

Recently, I woke up before dawn to join a line of lawn chair-ensconced, knee-blanketed, coffee-clutching parents outside our local community centre. I had a riveting conversation with the man next to me for over two hours before actually seeing face when the sun finally broke over the frigid horizon. The reason we were there? To secure a spot for our kids at a popular summer day camp.

Despite its social-event quality, the line struck more than a few of us as an absurdity. Camping overnight for concert tickets may have once been a badge of honour for teens, but adults who martyr themselves so their child can spend a week making papier maché pencil holders (ashtrays being a no-no these days) is surely a sign the earth has tilted imperceptibly off its axis.

Luckily, Olga Grushin’s new novel, based on the year-long lineup that formed in anticipation of a concert by exiled Soviet composer Igor Stravinsky in Moscow in 1962, makes my morning of pseudo self-sacrifice look like the child’s play it had the intention of enabling.

Grushin, a Russian-born American, creates a composite version of cold-war era Soviet Russia that borrows freely from three different periods of history: the repression of Stalin’s 1930s, the hopefulness of Khrushchev’s Thaw (late 1950s-early 1960s), and the stagnation of Brezhnev’s 1970s.

As the novel begins, a parade celebrating the 37th anniversary of “the Change”— a thinly veiled reference to the 1917 October Revolution—is underway. A new kiosk has appeared on the street, causing people to reflexively line up in front of it even though it will be weeks before they find out what will be sold there. With most people living a life of austerity, every line represents hope; the possibility that a void will be filled. Yet in their whispered desire for “something good” (imported silk scarves and “genuine” leather boots are mentioned) the denizens of post-Change society seem to share something with their Western capitalist counterparts: a tendency toward indiscriminating consumerism.

As the mystery commodity is eventually revealed, the line consolidates into a self-policed realm of devotees, many of them musicians or with some other connection to the great “Selinsky.” The rules are that each person will be allowed only one ticket. Despite a ruthless dedication among the queuers, doubts, rumours and paranoia persist: will the tickets ever materialize? Is Selinsky even alive? Is the line a ruse by authorities to weed out undesirable elements?

Anna, a middle-aged schoolteacher worn out by life’s hardships, joins the line early with the expectation that a ticket will change her life for the better. Although she herself is “tone deaf,” if she gives it to her musician husband, Sergei, her self-sacrifice may help revive their lackluster marriage. On the other hand, there’s the possibility that going to the concert will cause her mother, a reclusive widow who once danced to Selinsky’s compositions as young ballerina, to finally break her long-standing silence about her mysterious past.

But Sergei counters his wife’s efforts at intimacy with selfish indifference. He sees attendance at the concert as his birthright. And, after harboring secret intentions to steal the ticket for himself, he fantasizes about giving it to a woman in the line with whom he shamelessly flirts. Sergei and Anna’s adolescent son Alexander takes the third shift, and he uses the opportunity to learn his way around the black market, his parents so preoccupied that they don’t notice he’s stopped attending school.

As the year wears on, many of the queuers find themselves questioning, Godot-like, the meaning and purpose of their wait. The reality of its supposed reward—a single night of enchantment—has come to seem increasingly obscure. Anna’s hope that the ticket will help heal her family is undermined by the fact that it literally forces them further apart: one of them must always be physically absent in order to wait in line.

The Line deals with a compelling subject full of literary possibility. Grushin’s much-praised first novel, The Dream Life of Sukhanov, proved her a worthy candidate for the job. Yet although in her own notes she refers to the “unique and complex social system” that evolved around the Stravinsky line, Grushin mostly limits her scope to four characters, all of whom struggle with almost unbearable isolation. Plot is a problem too: often it feels like padding between stagy displays of descriptive prowess —most of it pathetic fallacy aimed showing us how desultory life is (He walked home …  across parks that were not parks at all but close, black, sinister forests filled with murderous benches leaping at him like tigers striped with planks of shadow…).

There are times when the writing here gains momentum, which is just as quickly lost. In a twist ending, Grushin’s characters do manage to find some fulfillment from an unexpected place. Her readers, on the other hand, may not feel that their own patience has been quite so amply rewarded.

Comments: Comments Off on THE LINE
by Olga Grushin Posted by: admin Categories: Adult Fiction, Reviews Tags: composite version, different periods of history, october revolution, periods of history, soviet composer, Toronto Star
← COMMITTED:
A Skeptic Makes Peace with Marriage
by Elizabeth Gilbert
A HISTORY OF MARRIAGE
by Elizabeth Abbott
THIS CAKE IS FOR THE PARTY
by Sarah Selecky →