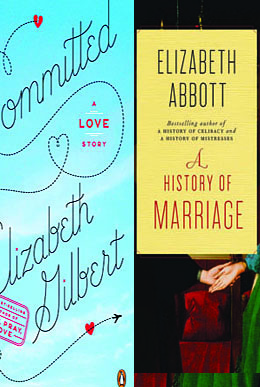 COMMITTED:
A Skeptic Makes Peace with Marriage
by Elizabeth Gilbert
A HISTORY OF MARRIAGE
by Elizabeth Abbott

Marriage is grand, but divorce is a hundred grand, the saying goes. In Elizabeth Gilbert’s case, however, divorce—or at least her ruminations about it—has been a windfall. Her 2006 memoir, Eat, Pray, Love, about the travels she undertook when her marriage imploded, topped bestseller lists and, if that weren’t reward enough, Julia Roberts will play her in a movie version of the book to be released this summer. Eat, Pray, Love’s neat, fairytale ending had Gilbert hooking up Felipe, an older, divorced Brazilian gem trader with whom she finds a more sober, mature happiness (“I can no longer do infatuation. It kills me,” she declares) which they root in a pact: “to never, ever, under any circumstances, marry.”

As a product of the 1970s’ divorce epidemic, “sanctity” and “inviolability” were not words that came to mind when I thought about marriage. My parents had already set the bar pretty low, but as I got older my awareness of marriage’s patriarchal roots also struck me as unsavory. But really, it wasn’t so much that I was against marriage, it just didn’t strike me as important or necessary, particularly given that common-law couples enjoyed roughly the same legal rights as married ones. And wasn’t looking for new ways to bring stress and debt into one’s life a kind of perversity

I’m not sure then if irony or hypocrisy was the operative term when, 13 years and two kids into a happy common-law union, my partner and I found ourselves scouring the internet for someone to perform a small, secular wedding ceremony at our cottage (a lapsed Unitarian minister and dead-ringer for Peter Sellers who was living common-law: he was ours immediately).

So why did we do it It certainly wasn’t pressure from our families, our indifferent kids or a latent desire for respectability. And we didn’t need the loot. Part of the motivation was practical: on what other occasion would our families meet that wasn’t one of our funerals but it would be churlish to say that romance didn’t play a role. We had attended friends’ weddings that were full of warmth and a sense of connectedness and we wanted, I suppose, a piece of that feel-good pie. 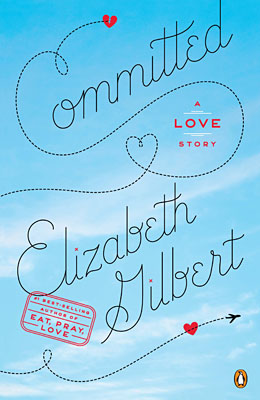 The title of Gilbert’s surprisingly entertaining new book: Committed: A Skeptic Makes Peace with Marriage is our first clue that her pledge didn’t hold. After stretching the limits of the three-month visitor visas Felipe used to stay with her in the U.S., the Department of Homeland Security finally issued an ultimatum: get married or Felipe would be barred permanently from the country.

And so, in a rushed engagement Gilbert describes as “more like something out of Kafka than out of Austen,” the two pledged to marry in the interrogation room of the Dallas/Fort Worth Airport before embarking on a peripatetic year, spent mostly on the un-purgatory-like beaches of Bali, awaiting the clearances and paperwork necessary before the dreaded deed could take place.

But Gilbert was determined not to feel like she had merely capitulated. A compulsive delver into matters related to her own psyche (her detractors have focused on the entitled nature of this soul-searching), she resolved to spend her year in exile with the goal, no less, of “unraveling the history of monogamous Western marriage in order to better understand my inherited assumptions, the shape of my family’s narrative, and my culturally specific catalogue of anxieties.” 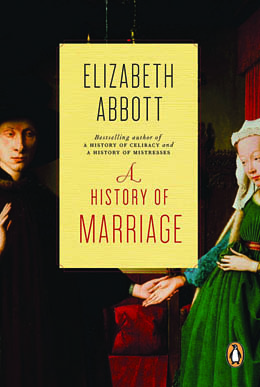 Elizabeth Abbott accomplishes just this, minus the breathless hand wringing, in A History of Marriage, a follow-up to her two previous histories of celibacy and mistresses. A professor whose book Sugar: A Bittersweet History was short-listed for the Charles Taylor Prize last year, Abbott takes a scholarly but highly readable approach to marriage and its natural corollaries—divorce, love, sex, race, money and weddings—all of it peppered with wonderful archival photographs and individual case studies. Nothing if not comprehensive, the worst that can be said of this book is that in its tireless covering of bases it can feel a bit like a high school textbook in its latter half.

Of course marriage might not exist as a topic for debate these days were it not for the headline-hogging issue of same-sex unions, which both authors support. Addressing historically based arguments against it, Abbott points out that although same-sex marriage did not survive antiquity, it was condoned in ancient Rome and some native North American cultures.

The evangelical far right in particular has repeatedly brought religion into the debate, yet for ten centuries the church saw marriage not as holy or sanctified but as: “a repugnant wordly affair that had everything to do with sex and females and taxes and property, and nothing whatsoever to do with higher concerns of divinity” Gilbert writes. Abbott backs this up, noting that right up to the Reformation: “church, state, and reformers waged battle over whether the nature of marriage was sacramental, spiritual, or civic.” Even in 18th century North America, common-law relations or pregnancy were thought to form the legitimate basis of marriage. And as far as the issue of children is concerned, both authors point to studies showing that stability at home, not the gender of the parents, are the key factors to success.

Abbott and Gilbert both believe it’s only a matter of time before the law changes. Why Because regardless of whatever romantic notions we weave around it (and make no mistake: these are new notions. For the majority of its long history, marriage had nothing to do with love) marriage today is a legal, secular institution whose only constant over time has been its remarkable malleability. Queen Victoria, for example, can be credited (or blamed) for spawning the white wedding “tradition” that today is a multi-million dollar industry—one that Abbott believes subordinates the seriousness of a lifelong commitment to a one-day event.

Despite coming at it from quite different angles, both authors come to much the same conclusion about the state of North American marriage today. Gilbert, ever prone to happy endings, weds Felipe, concluding: “Marriage is a game. They (the anxious and powerful) set the rules. We (the ordinary and subversive) bow obediently before those rules And then we go home and do whatever the hell we want.” Abbott, who also sees marriage as “a lived experience” focuses more on its economic and social realities, noting astutely “that marriages in mansions and marriages in shacks feel quite different.”

So what did getting married change for my husband and me Tangibly, nothing, except that a smattering of relatives now send us Christmas cards with “Mr. and Mrs.” tacked on to his name (despite the fact that I did not change mine). But where that once would have annoyed me, it now just seems hopelessly quaint and funny—proof positive that marriage does evolve, even in the space of a single generation, and that it will continue to do so in spite of anyone’s efforts take ownership of it.