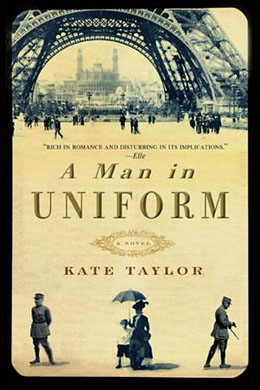 A MAN IN UNIFORM
by Kate Taylor

Canadians reveling in Ryder Hesjedal’s 7th place showing at the recent Tour de France could be forgiven for not knowing that the race itself has rather ignominious roots in the Dreyfus Affair, as the late-19th case of a Jewish army captain falsely convicted of selling French secrets to the Germans is known. Although Alfred Dreyfus was eventually exonerated—going on to serve in the First World War—the debate over his innocence was massively polarizing, splitting France along race lines into camps of so-called “Dreyfusards” and anti-Dreyfusards. The Tour was the brainchild of the anti-Dreyfusardian sports magazine l’Auto, which used it to boost sales and lure readers away from its Dreyfusardian rival Le Velo.

Critic and journalist Kate Taylor’s second novel uses the Dreyfus Affair—also touched on in her first novel, Mme. Proust and the Kosher Kitchen—as the point of departure for what is essentially a hardboiled detective novel centered on a fictional Parisian lawyer who goes undercover to unearth the truth about Dreyfus for a mysterious and highly attractive female client.

As the novel begins, we find 43-year-old François Dubon living a genteel life in a fashionable district of Paris with his wife Geneviève, whose conservative military family have given Dubon access to a well-heeled clientele for his thriving, if rather banal, law practice. Dubon’s orderly life includes daily visits to his mistress Madeleine, whom he keeps happy with a comfortable apartment and regular deliveries of bonbons and flowers.

As a junior lawyer, Dubon gave legal help to insurgents in the aftermath of the government crackdown on the short-lived 1871 Paris Commune. He is aware that his in-laws would likely never have supported his marriage to their daughter had they been aware of his socialist activities. For keeping his secret safe, he owes a debt to his friend Masson, who vouched for Dubon at the time of his engagement.

Dubon’s latent crusading spirit is piqued, however, when a widow claiming to be a personal friend of Dreyfus appears at his office asserting the latter’s innocence. Like all femme fatales worth their salt, she inveigles Dubon into service with an irresistible combination of ego-stroking and eyelash-batting.

Although initially unconvinced of the widow’s claim, Dubon nevertheless musters enough derring-do to swipe his brother-in-law’s army kit and pose as a temporary clerk at the military’s Statistical Section, which despite its mandate as a counter-espionage unit, was—at least as Taylor depicts it—about as hard to penetrate as a gathering of Jehovah’s Witnesses.

Many of the characters Dubon encounters at the unit were real life players in the Dreyfus case. They include Colonel Picquart, one of the few military figures to have doubted Dreyfus’s guilt; Major Henry, who masterminded a forged letter meant to seal the Captain’s fate; and Mme. Bastian (a.k.a “the usual route”), a cleaner at the German embassy who provided the unit with the precious contents of the embassy’s trash bins.

By the time Dubon sends his conclusions, both about Dreyfus’s innocence and about who the real culprit is, to the press, his voice is already one amongst a growing chorus of doubters. This gets Taylor out of the awkward position of positing a fictional character as Dreyfus’s emancipator.

Before that point is reached though, there are enough double crossings, seductions, secret passageways and murders to skin a black cat. Taylor abandons the radical time shifts of Mme. Proust in favour of a linear narrative—so linear, in fact, that it makes you realize how rare a strategy this is nowadays. New chapters begin where the previous ones leave off even when the drama builds to a peak, making the pauses in between feel almost like commercial breaks, or as if the novel were intended for serialization.

A dramatic climax between Dubon and Masson, who—no surprise to the reader—turns out not to be what he had seemed, is clichéd to the point of high camp, as is much of the book’s dialogue. Witness this chapter’s Hardy Boysesque cliffhanger end:

“It’s that way, Monsieur,” he said, gesturing back the way they had come, towards the busy boulevard at the top of Madeleine’s street. “Just what exactly is your game”

The man replied with the same painfully accented French, “I might ask the same of you, Maître Dubon.”

Readers expecting insights into the Dreyfus Affair’s attendant issues of anti-Semitism and injustice may be disappointed in A Man in Uniform, muddied as it is with unlikely scenarios and corny exchanges. But those willing to take off their thinking caps for a few hours, it’s an awfully enjoyable romp. Taylor writes clearly and transparently, leaving nothing to abstraction. And the book moves along at such an admirable clip that it’s hard to believe it won’t carry on without you if you dare put it down.

Comments: Comments Off on A MAN IN UNIFORM
by Kate Taylor Posted by: admin Categories: Adult Fiction, Reviews Tags: fashionable district, government crackdown, hardboiled detective, mme proust and the kosher kitchen, socialist activities, Toronto Star
← THIS CAKE IS FOR THE PARTY
by Sarah Selecky
ISOBEL AND EMILE
by Alan Reed →