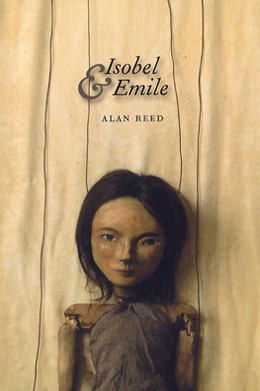 ISOBEL AND EMILE
by Alan Reed

Isobel and Emile marks Montrealer Alan Reed’s transition from poet to novelist, but only just.

The book tells the simple story of a young couple whose relationship has just ended. No explanation is given for the break-up, but a town mouse/country mouse scenario seems to be a factor. The two have been living in less-than-glamorous circumstances above a grocery store in the small town. But Emile is from the city, and he decides to move back there to make a film about his passion: puppeteering.

Following Emile doesn’t appear to be an option for Isobel. Judging by her mother’s reaction to her having left home, she also seems to be younger than he is. Yet even after Emile leaves her, Isobel continues to live above the grocery store, where, despite her waifishness, she takes a job unloading the store’s delivery truck.

Back in the city, a glum Emile moves in with his bartender friend, Nicolas. Occasionally he drinks wine with the flame-haired, potentially rapacious, Agatha, who lends Emile a camera and encourages him to show his puppet film at a festival she is organizing.

The novel exudes a baleful melancholy and romantic otherworldliness heightened by a series of anachronisms: all the characters smoke (indoors and out); they also travel from small towns to big cities on trains (which perhaps more than anything rules out the possibility of a present-day Canadian setting).

What make Isobel and Emile unusual, however, is its deconstructed, repetitive, almost incantatory prose. There’s no risk of comma splices here, and Reed’s manuscript must have been mercifully free of his auto grammar’s squiggly green lines. He sticks with the simple formula of subject/verb/object/period, building mood and plot through the overlap of words between sentences: “They were not wearing clothes. They were naked. They had been naked when they went to bed the night before. It had not troubled them. It had been dark.” Reed also avoids contractions, which means that his characters speak formally, as when Emile announces: “I do not know what I am going to do.”

This makes Isobel and Emile read at times like a children’s book, at times almost like scripture. It often feels like we’re going down a long staircase one step at a time.

Of course, any author who puts style front and centre to such a degree must be prepared for the inevitable whys this raises in the mind of the reader. My own sense is that Reed is echoing the way we rebuild ourselves after emotional trauma—the measured process of trying to get a grip, as it were.

But the spell is broken somewhat in the unsent letters Isobel writes to Emile. The voice of the letters falls halfway between regular speech and the novel’s truncated prose, which makes us aware of what feels like Reed’s uncertainty about how to tackle the intrusion of them into the narrative. Long-term, the increasingly predictable repetition makes it a little to easy to jump ahead in the text, rather than savor the writing. More problematic still is that Reed’s Dick-and-Jane style sometimes makes it seem like the narrator is condescending to the characters, or worse, to us.

Cons aside, though, Reed deserves praise for his willingness to experiment. In the end, he manages to build oddly tangible characters. There’s also a purity to the writing that does manage to strike, if sometimes only fleetingly, at the heart of matters of the heart. At those times, what emerges is unexpectedly, idiosyncratically beautiful.