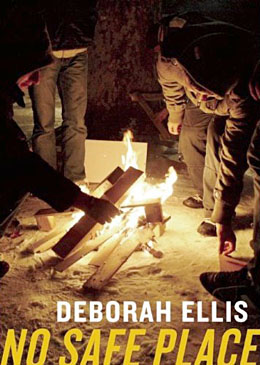 NO SAFE PLACE
by Deborah Ellis

In her fiction and non-fiction, Deborah Ellis has relentlessly brought to light the ways in which war and social injustice affect young people around the world. She continues to do so in her powerful new novel.

Fifteen-year-old Abdul is a Kurd from Baghdad. Abdul’s father and brothers were killed by an American bomb during the initial phase of the 2003 invasion of Iraq, his mother murdered a few years later by a religious militia. Yet it takes the beating death of his best friend by locals to convince Abdul to flee his country for good.

After a few treacherous months on the road, Abdul reaches the coast of France, where he negotiates passage across the English Channel with a devious smuggler. Aboard the unsteady open boat, Abdul encounters Rosalia, a Roma girl from Eastern Europe who considers her people to be her homeland, and Cheslav, a Russian teen raised in an orphanage whose arrogance masks the humiliations he suffered there and in military school.

A dispute eventually sends the smuggler overboard, and despite deep mutual distrust, the three shipmates are forced to come together to navigate their way to shore. A run-in with some wealthy Americans aboard a cruiser thickens the plot before the teens find temporary harbour in a cave in Cornwall.

Ellis doesn’t shy away from difficult realities. When Rosalia’s uncle sends her to work in a factory in Germany, for instance, she is clearly about to be sold into sexual slavery (a fate she narrowly escapes).

Ellis has structured No Safe Place as an adventure story, and her gritty, lifelike characterizations sometimes chafe against the obvious make-believe (such as when the teens effortlessly commandeer a luxury yacht). But Ellis’s young readers love her because she speaks to them as intelligent, empathetic beings who will soon have agency in the world, and in No Safe Place, this gift is still powerfully evident.