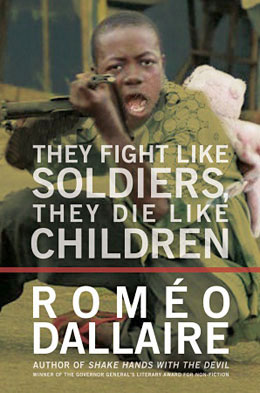 THEY FIGHT LIKE SOLDIERS, THEY DIE LIKE CHILDREN:
The Global Quest to Eradicate the Use of Child Soldiers
by Roméo Dallaire

Roméo Dallaire came to global ­attention for his efforts to stop the Rwandan genocide while serving with the U.N. He also received enormous praise for his book on the subject, Shake Hands with the Devil, which won a 2004 Governor General’s Literary Award. Since retiring from the military a decade ago, Dallaire’s chief mission in life has been the fight to eradicate the use of child soldiers, a practice he first ­encountered in Rwanda. Dallaire argues that eliminating this scourge requires nothing short of a complete paradigm shift – we need to see these children not simply as victims of abuse but as “weapons systems.” His reasoning is straightforward: if children are indeed weapons systems, it should be possible to decommission them.

Dallaire portrays the making, training, and deployment of child soldiers in detail that is often painful to read. He enumerates the many reasons why children have become the weapons of choice in conflicts around the world, both by governments and criminal enterprises such as the drug trade. The worldwide proliferation of light weapons is partly to blame, as is the sheer plenitude of available recruits: overpopulation has made children a virtually limitless, self-renewing resource. Children are used as combatants, bait, cannon fodder, and even sex slaves. They are cheap to employ and easily replaced.

If Shake Hands with the Devil was an elegy, They Fight Like Soldiers is a call to ­action. Forced to look on as thousands ­perished in Rwanda, Dallaire is determined to make a tangible impact on a problem that affects more than 25 million children around the globe. He has already begun to do so through his role as leader of the Child Soldiers Initiative, a coalition of military members, ex-child soldiers, NGOs, and academics. Dallaire explains CSI’s mandate, why previous strategies failed, and how technology and the Internet can empower average citizens in the fight for change.

With his tremendous compassion, tenacity, and crusading spirit, Dallaire has earned the public’s respect and admiration in a way few Canadian public figures ever have. Given the heaviness of its subject, many will choose not to read this book. Yet the world ignored Dallaire once before, with terrible consequences. This time he deserves our full attention.

Comments: Comments Off on THEY FIGHT LIKE SOLDIERS, THEY DIE LIKE CHILDREN:
The Global Quest to Eradicate the Use of Child Soldiers
by Roméo Dallaire Posted by: admin Categories: Adult Non-fiction, Reviews Tags: global attention, military members, Quill and Quire, shake hands with the devil, victims of abuse, worldwide proliferation
← GOLD BOY, EMERALD GIRL
by Yiyun Li
HOW THE SCOTS INVENTED CANADA
by Ken McGoogan →