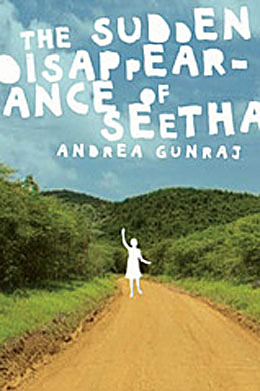 THE SUDDEN DISAPPEARANCE OF SEETHA
by Andrea Gunraj

The titular Seetha is the daughter of Neela, one of two main protagonists in the novel. Contrary to the claim on the book’s cover, however, Seetha’s disappearance is not sudden, but, rather, agonizingly anticipated by Neela, who lives under constant threat from the child’s mercenary, racketeering father.

The meat of the novel is the events leading up to Seetha’s abduction, which have their roots in the childhood of Neela and her brother, Navi. Left to the care of their grandmother when their mother goes overseas to find work, the two fight for the mother’s sporadic, long-distance affections. Neela is particularly jealous of Navi’s academic accomplishments, and wages a war of sabotage against him. A deep animosity persists between the two even after Navi leaves to pursue a career in the north.

Neela forfeits her own future the day she takes up with a local thug, Jaroon. Neela becomes pregnant, and, disenchanted with Jaroon, escapes back to her village, knowing it is a matter of time before the child’s father comes to claim his daughter back.

Gunraj – who is of Guyanese descent – has her characters speak in the creole of their unidentified island nation, and the dialogue, which has a logic and musicality that is entirely transfixing, is one of the novel’s many strengths. Gunraj’s characters are sometimes histrionic, but it is testament to her sublime control over the material that the story never becomes so. What we get, instead, is a riveting, expertly told tale full of satisfying counterbalances and impeccable narrative timing. This is an exciting, memorable debut.