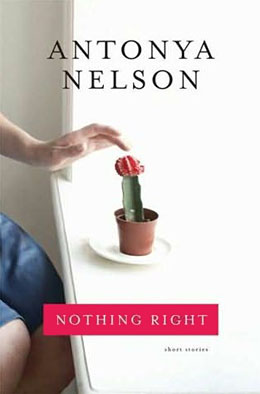 NOTHING RIGHT
by Antonya Nelson

The qualities of Antonya Nelson’s short story writing are not what you’d call indefinable or elusive — they are, rather, stunningly concrete and tangible. This is a writer who seems to ghost-write other peoples’ lives: writes lines we wish we could write, articulates ideas felt but only haltingly spoken. The words she uses to do this are chosen with the fastidiousness and perfection of poetry, yet this is a writer who practically wallows in her prose. It’s dirt, but clean dirt. And she does it all flagrantly, in words that can be read again and again without losing their force or wit.

Nelson has written eight books of fiction —three of them novels — for which she has been decorated like a general after a series of hard-won foreign wars. The stories in this collection occur in places she has lived: Wichita, Telluride and Houston; most were published previously in various magazines.

Nelson’s subject matter of choice is families: husbands and wives; children and parents; pregnant teens who blur the lines between categories. She also writes about the people that intrude on these configurations: the lovers and boyfriends — or the neighbours and acquaintances that might become these things. A drinking game based on the frequency with which affairs occur in her stories would be a sure-fire guarantee of drunkenness.

But outsiders just as easily slide into the role of interlopers. Affairs, divorces and resentments aside, Nelson still values kin, for all its homely imperfections and sometimes gossamer-thin lines of connection.

Infidelity is never presented as the bottom of the moral barrel, but rather one of a series of choices we make about relationships, the casualties of which are tantamount to being victims of friendly-fire. The father in Falsetto is described as liking “old-fashioned things—wind-up clocks, typewriters, push mowers, his own long marriage.” In Shauntrelle, a recent divorcee notes: “It wasn’t just a husband one divorced, but a life. A credit rating. Certain friends—sadly, some of them small children. The mother-in-law, that innocent bystander.”

The moral relativity of Nelson’s universe is one where the strong protect the weak, regardless of their transgressions. In Party of One, Emily is carrying out an act of mercy when she meets with the married man her sister is having an affair with; her goal is to instruct him how to orchestrate the break-up without precipitating another suicide attempt — the last one having come about as a result of an affair with Emily’s own husband. Emily has also not told her sister she knows this. She also hasn’t told her that she has uterine cancer — a disease she suggests the lover confer on his own wife as an alibi.

Falsetto takes place in the aftermath of a car crash that has left the parents of Michelle and her very young brother clinging to life. Max, the boyfriend, wants to play the supporter role, but his way of doing so irritates Michelle and her feelings suddenly hit their tipping point; a molecular shift with instant ramifications: “She felt poor and pitiful, watching the clouds, like an orphan, undeniably bereft. Just that quick, she quit loving her boyfriend. He did not belong in the window reflection: the oncoming storm, two sad siblings.”

Similarly, in Biodegradable, a married woman’s affair with a man she meets at a conference goes sour the minute he announces he is selling his grandmother’s farmhouse: the location of their trysts. Without the familiar backdrop of rag rugs and ancient spice jars, the woman suddenly finds the escapade unpalatable.

We and They stretches idea of familial allegiance even further. A white family of free-thinking, atheistic liberals, convinced of their intellectual superiority over their fecund Catholic neighbours, the Pierces, adopt a brother and sister from a troubled black family. The boy is delightful, but Angel, the girl, is as unattractive as she is churlish: “Loving someone as unlikable as Angel bought our family a lot of moral high-handedness. It was a special card and we each had our own rendition.” But the family’s “love,” persistent though it is, proves ineffectual; implicitly recognizing the ersatz nature of their affection, Angel never reciprocates. And, after revealing she is pregnant with the child of one of the Pierces’ sons, she wastes no time moving, happily, into the home of the family’s erstwhile mortal enemies.

Of the late John Updike, Nelson recently wrote: “I love how he made the ordinary beautiful, and the typically beautiful vaguely grotesque”; a comment that could be applied, with equal validity, to her work. Ten years ago The New Yorker named Nelson one of “twenty young fiction writers for the new millennium.” While no longer technically young, Nelson can take as consolation a comfortable spot among the great modern short story writers — like Updike, Munro and Carver — who show us the unique power of the genre.