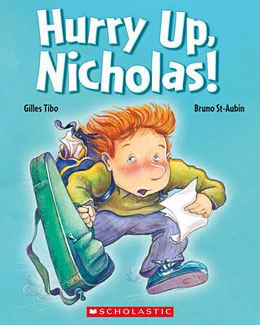 HURRY UP, NICHOLAS!
by Gilles Tibo

The powerhouse Quebec-based duo of writer Gilles Tibo and illustrator Bruno St-Aubin team up here for the third in their Nicholas series, aimed at the early elementary set.

Previously, in Too Many Books!, Nicholas had to be shown how reading can be pleasurable after too many instruction manuals were shoved down his throat, while in Where’s My Hockey Sweater? his parents made a sport of rolling their eyes at Nicholas’s lack of organization on the morning of his first hockey practice.

In Hurry Up, Nicholas!, our hero is the hapless victim of extreme parental over-programming. The story begins with Nicholas’s mother whisking him off after school to violin, karate, sculpture, and swimming lessons. The manic pace is kept up for the rest of the week, with Nicholas’s father and grandparents taking turns as whip-crackers. Naturally, Nicholas cannot keep up the pace, and ends up bedridden, only to discover that his teachers will now be coming to the house instead.

The book’s humour lies chiefly in the increasingly absurd list of lessons Nicholas is meant to attend – among them indoor target archery, modern circus clownery, and “how to be a television star.” The message at the book’s heart is less funny than disturbing, however, coming off a little like a help line for similarly overscheduled kids. (It’s also, of course, a nudge to overparenting parents.) While Tibo’s big punchline ultimately falls flat, his story gets considerable help along the way from St-Aubin’s lively pen-and-watercolour illustrations.

Comments: Comments Off on HURRY UP, NICHOLAS!
by Gilles Tibo Posted by: admin Categories: Reviews, YA & Kids Tags: picture book, Quill and Quire
← NOTHING RIGHT
by Antonya Nelson
WHISPERS FROM THE GHETTOS
by Kathy Kacer and Sharon McKay
CHILDREN OF WAR
Voices of Iraqi Refugees
by Deborah Ellis →