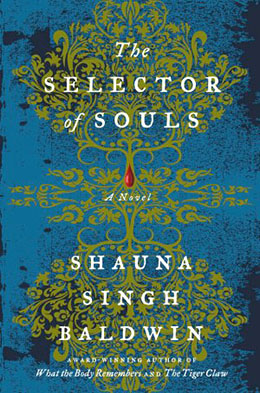 THE SELECTOR OF SOULS
by Shauna Singh Baldwin

Shauna Singh Baldwin’s hefty third novel opens in the remote mountain town of Gurkot, where a Hindu woman is about to commit infanticide against her granddaughter by taking her to a cave and forcing her to swallow tobacco.

Set in India in the mid-1990s, the novel’s first half outlines the events that led to this moment. The reasons for the murder, however, are given in the scene itself: Damini’s daughter Leela and her husband, poor rural labourers, already have a daughter and will never be able to afford the dowry necessary to marry another one. The girl’s father refuses to name her, so her mother refuses to feed her. As Damini performs what she sees as an ugly but necessary deed, she prays to the goddess of the cave that her future actions will compensate for this “stain” on her karma and that the child’s atman (soul) will “take shape when this world is a better place for girls.”

Singh Baldwin has never been accused of lacking ambition in her novels, and it’s a charge unlikely to be levelled this time either. Although The Selector of Souls is mostly about the appalling way women and girls are sometimes treated in the world’s largest democracy, it also strides boldly through the minefields of religion, political corruption, abortion, AIDS, caste and the Indo-Pakistani arms race along the way.

Before she came to live with Leela, Damini lived in New Delhi, where for the thirty years she was the ears for elderly Mem-saab, her beloved, deaf employer. (Readers of Singh Baldwin’s first novel, What the Body Remembers, may remember Mem-saab as Roop, the young second wife brought in to provide her Sikh husband with a child.) When Mem-saab dies, her avaricious son, Amanjit, sends Damini unceremoniously packing. Going to Leela’s is a last resort—Damini knows the villagers will the imposition as an unfair burden on her daughter and son-in-law.

Damini’s story is interwoven with that of Anu, a Hindu-Christian unhappily married to the abusive son of a media magnate. Anu has sent their daughter to Toronto to be raised by Anu’s cousin. And her husband, having never wanted a daughter anyway, doesn’t object. With her daughter gone, Anu files for divorce and becomes a nun with the local Catholic order, which sends her to Gurkot to work at the convent health clinic.

It’s in Gurkot that Damini and Anu’s paths finally come together. Anu is sympathetic to Damini’s plight and, unaware that Damini is receiving commissions from the local fertility clinic to bring women in for ultrasounds and, depending on the result, “cleanings,” suggests Damini train as a midwife. Although the Church opposes abortion, it also frowns on condom use, which Anu quickly discovers creates its own set of problems. Increasingly politicized, Anu eventually seeks her own path toward social justice.

This is a detailed, wrenching account of an entrenched cultural issue that, twenty years later, continues to make disturbing headlines. Singh Baldwin’s depiction of her characters’ pragmatic survival tactics—switching religions or ignoring caste when it’s convenient—is often illuminating. Yet the novel’s unremitting joylessness takes its toll, and reading it eventually starts to feel like a slog. Singh Baldwin’s style couldn’t be further from the playful magic realism of Midnight’s Children (attracting fresh eyes these days thanks to the recent motion picture and Salman Rushdie’s forthcoming memoir), or the acrobatic lyricism of Arundhati Roy. Her India is a brutal, unforgiving place where girls are treated as expendable nuisances not only by men, but often by other women too. As a primer on a distressing topic, The Selector of Souls is sobering, instructive; as literature, it never quite soars.

Comments: Comments Off on THE SELECTOR OF SOULS
by Shauna Singh Baldwin Posted by: admin Categories: Adult Fiction, Reviews Tags: Toronto Star
← JOSEPH ANTON
by Salman Rushdie
MY BOOK OF LIFE BY ANGEL
by Martine Leavitt →