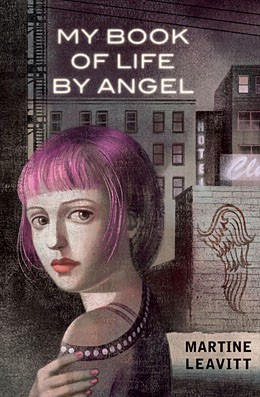 MY BOOK OF LIFE BY ANGEL
by Martine Leavitt

After a brief return to romantic high fantasy with 2006’s Keturah and Lord Death, Martine Leavitt turns her sights to her other forte: troubled youth in gritty contemporary settings. And while it doesn’t get much grittier than teen prostitutes working the so-called “kiddie stroll” on Vancouver’s Downtown Eastside at the time of the Pickton murders, the Alberta-born author handles the subject with uncommon grace. 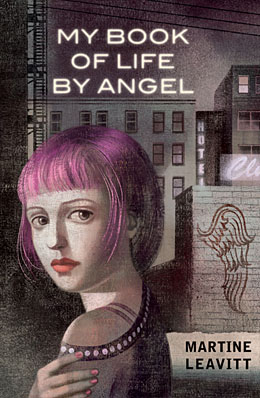 Leavitt has always been something of a style virtuoso. In her fantasy novels she harnesses Arthurian-era language and rhythms to offset the sting of her often-dark themes. In My Book of Life by Angel, however, she uses minimalist blank verse to rich effect in telling the story of Angel, a 16-year-old, middle-class runaway coerced into addiction and sex work.

As in Leavitt’s other novels about kids on the street – the Mr. Christie Award-winning Tom Finder (2003) and Governor General’s Literary Award finalist Heck Superhero (2004) – our protagonist is separated from the safe harbour of home by a matter of degrees, though psychologically she might as well be on the moon. The duality of life on the street, open yet prisonlike in its inescapability, is one of the many paradoxes the novel subtly explores. Another is the literal and metaphoric “hole” Angel blames for her circumstances. The holes in her mother’s bones (osteoporosis) came first, but it was an undetected hole in her mother’s heart that killed her, leaving Angel feeling a void of her own: “Serena said, / that put a hole in you, Angel, / which you tried to fill up with Call.”

Call, who refers to himself as a businessman and dresses in such a way that “he could walk into an office / and nobody would blink,” offers yet another paradox.  Lurking under the respectable clothes is a predatory pimp with a bloodhound’s nose for susceptibility (“renewable resources” is his answer when Angel asks him what business he’s in).

After her mother dies, a rudderless Angel hangs out at the mall, playing an unexpectedly poignant adolescent version of house:

When she gets caught shoplifting display shoes from her pretend closet it’s the lupine Call who steps in like a hero, offering first a sympathetic ear and free lunch, then the “candy” that “makes the missing of mom [go] away.”

Angel’s bereft father, driven to despair by his daughter’s shoplifting and drug use, watches “with given-up eyes” as she packs to go live with Call. At his seedy apartment, kisses and sweet talk soon give way to entreaties: Call needs money to get more of the candy Angel likes so much, the candy she now needs to not feel sick. Angel says yes and senses, as she does so, a door slamming shut behind her. Assent, she realizes, has made her a “word,” and “my dad would never allow a word like me.” Once he has “made” her, Call blocks any possibility of Angel’s escape by threatening to harm her younger brother, Jeremy. Despite their brief appearances in the narrative, Angel’s father and brother remain powerful presences throughout – further examples of how Leavitt harnesses absence to great effect.

On the street, Angel encounters a wide range of humanity, each with peccadillos to match. “Poetry, that is twisted,” says Call of “John the john,” who pays Angel to read from Milton’s Paradise Lost. Word is also out about sinister Mr. P who drives a van with tinted windows that girls enter but never seem to emerge from. Angel wonders if Mr. P could be behind the recent disappearance of her friend Serena.

“Mr. P” refers to Robert Pickton, the real-life convicted killer implicated in the deaths of 49 women who disappeared from the Downtown Eastside in the 1980s and ’90s. Leavitt dedicates the novel to Pickton’s victims, but sensibly leaves the gruesome details to an afterword in which she provides background information.

“My Book of Life by Angel” is the title Angel gives to the notebook she buys after Serena goes missing. In it, she vows to honour her friend by cleaning up her act and getting back to her family. But it’s not until Call brings home Melli, an 11-year-old “baby” from a place called “Group Home,” that Angel concocts a risky plan she hopes will bring about some kind of escape.

Leavitt probes an exceptionally difficult, raw topic without resorting to cliché or melodrama. The nuance, economy, and delicacy with which she renders both the uniqueness and universality of Angel’s story is such that it’s easy not to notice that the novel contains no graphic sex or even swearing. In trying to illustrate how good this book is, it’s tempting to simply quote every line. Best just to read it and experience for yourself Leavitt’s remarkably powerful achievement.

Comments: Comments Off on MY BOOK OF LIFE BY ANGEL
by Martine Leavitt Posted by: admin Categories: Reviews, YA & Kids Tags: downtown eastside, kids on the street, literary award finalist, matter of degrees, Quill and Quire, renewable resources
← THE SELECTOR OF SOULS
by Shauna Singh Baldwin
TOBY’S ROOM
by Pat Barker →